Yes, #NonDairyCarrie has already had a I visted @DairyCarrie ‘s farm post. Yes Krista already did a post. I don’t care. First, I said it before, I love having farm visitors. Second, Krista is awesome and funny and nice enough to put it all on paper and not mind when I give her a hug when I smell like cow poop. That last part alone allows her to guest blog for me anytime!

So after realizing my only experience with farm life was Farmville on Facebook, Carrie invited me to her farm to learn the real thing. I’m proud to say not only did I learn, but I also milked a cow, rode in a tractor and got pooped on.

ALL IN A DAY’S WORK.

I’m not gonna lie, it was all kind of incredible. I got to Carrie’s farm shortly before 4 p.m. She asked I come later in the day so I’d have a chance to milk a cow, which was my life’s goal on that day. It’s beautiful out in the Lake Mills countryside, where her small farm sits. I met the pigs first. They were adorable. I pretended not to cringe when Carrie told me they’d be bacon soon.

That was the first moment I realized I’d never make it as a farmer. Rather than run the farm as a business, like farmers should, I’d treat it like an animal shelter and next thing you’d know I’d have 275 farm animals as pets because I wouldn’t want to give them up for food processing. (Don’t get me wrong, I love bacon. And steak. But… pigs are so cute! And COWS! Don’t get me started on cows.)

So I bid my farewell to the pigs, hoping they wouldn’t be on my next burger at AJ Bombers, and moved onto the chickens. I tell you what, chickens are gross. I’d gladly sacrifice the chickens on my farm. Who wants to cuddle with a chicken? I mean, really. But I do love the idea of waking up to the sound of roosters. Unless I had to do it every day, as Carrie does. So, again, I’m failing as a farmer.

Before I knew it I was being introduced to Penny the calf, and I swear to you people, the skies opened up and the angels sang in that moment. PENNY! IS SO CUTE! YOU GUYS! BABY COWS! Those eyelashes. And that face. And that nose. Carrie bought Penny for $30, and so help me God, no one should have EVER told me I could get a baby cow for $30 because next time I have $30 to spare my cats are going to be so pissed. 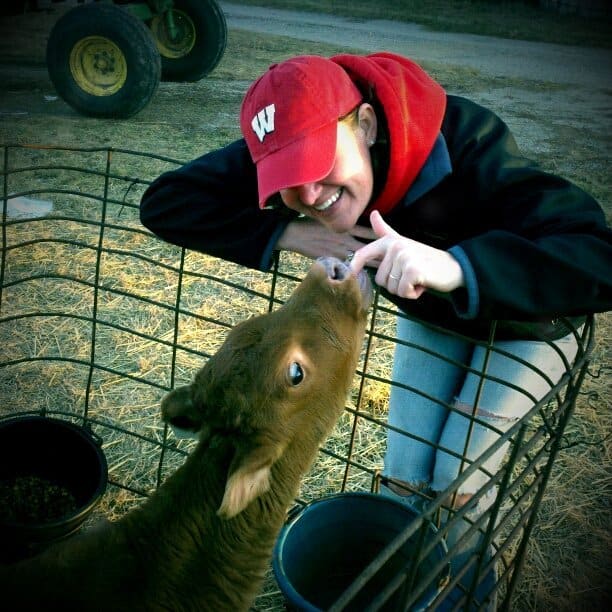 Krista and Penny sitting in a tree.....

She was absolutely the sweetest thing. Carrie told me to hold my hand out and she’d suck on my finger, thinking she’d get something good out of there. She didn’t find anything good, of course, but I died of joy over and over. I was introduced to the whole gaggle of babies. I thought about crawling in the pen with them to snuggle, but didn’t want Carrie to think I was a freak. Next time, baby cows. Next time.

In other news, it absolutely blows my mind that calves THAT big come out of a cow. I thought humans had it hard in childbirth, but you guys, cows have it way worse. And when Carrie told me where she has to reach her very own hand to help yank those calves out, my inability to become a farmer was solidified. I just can’t do it, you guys. I can’t. I’m sorry. I may have stuck my hand in a cow’s stomach, but I draw the line at privates.

I met some very enormous pregnant cows before hopping on the tractor for a ride down the road to a family farm where I’d milk my first cow. Don’t tell them I said this, but pregnant cows are SIGINIFICANTLY less adorable than their mini counterparts. Shhh. 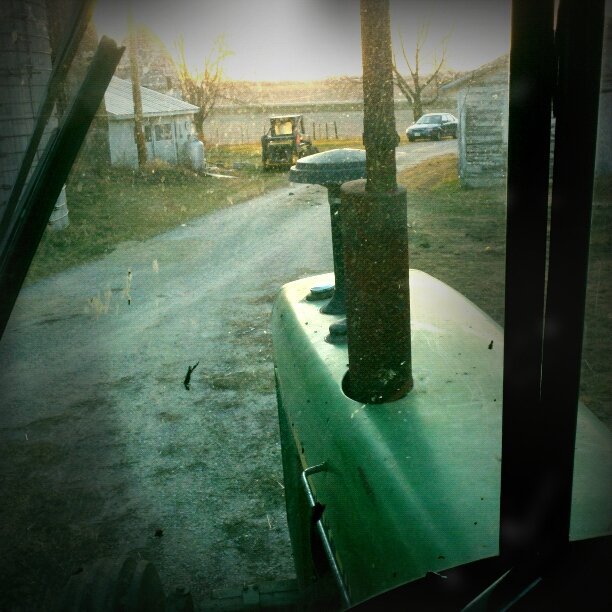 No comments allowed on the color of this tractor.

Watching Carrie interact with her cows was kind of precious. She knows them, the way you and I know our cats and dogs, their personalities and mannerisms. But they also know her. In my mind I could envision the difficulty I’d have recognizing all 250 of the cows I’d have on my pet farm.

I met two of the girls who were milking, they taught me to milk my first cow. Turns out it’s nothing like I imagined. I didn’t sit on a bucket and fill a pail with milk, milked by hand. I didn’t chew on straw. Left my overalls at home. There were MACHINES. They hooked little tubes to the little udders and corralled the cows in and out like a well-oiled machine. Technology milks cows these days. It takes about four hours to milk all the cows on the farm, it has to be done twice a day, and once again I could never be a farmer. 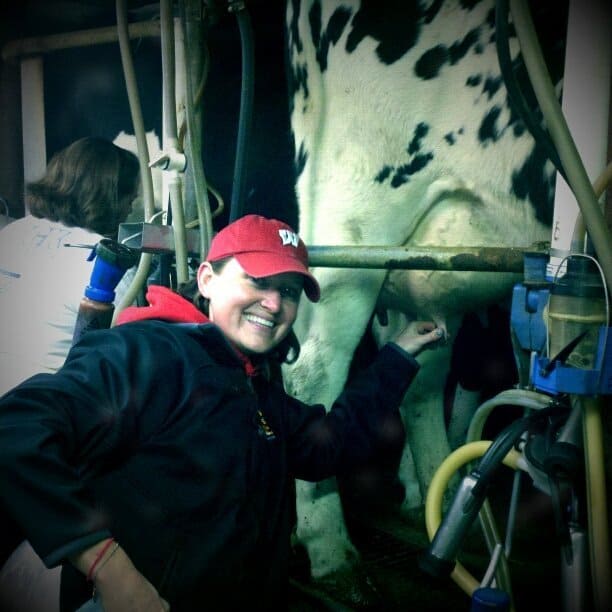 As I took the machinery in my hand to attach it to the udders, I got a fresh, warm pile of shit dumped on my hand. This came after I used my hands to squirt a stream of milk from each udder before beginning the process. I blushed. I did. Sometimes I can’t help it if I behave like a 12-year-old. Udders are just… too much. Too much.

Before the adventure ended, I made friends with a few barn cats and a farm dog, rode the tractor one more time, learned about a company dubbed “Dead Stock” (use your imagination) and was partially undressed by a horse named Pony. 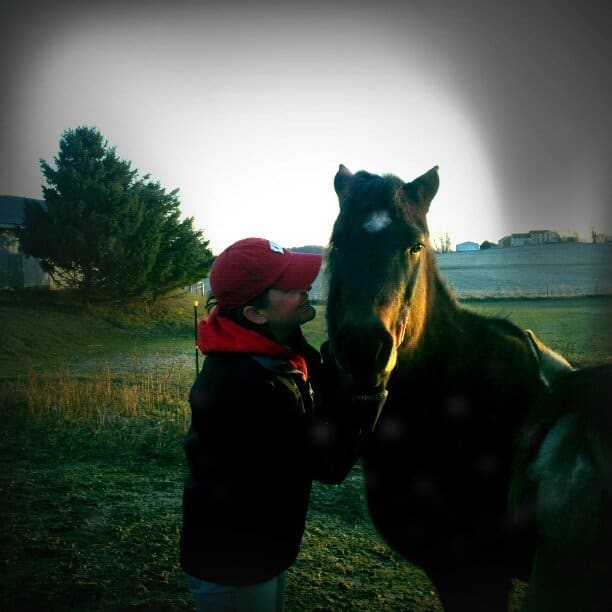 It was magical. Thanks so much to Carrie, who invited me into her world with enthusiasm, and taught me to appreciate much more an industry that was once so foreign to me. Now, if she really loved me, she’d give me Penny for Christmas. I’m keeping my fingers crossed.

Keep on keeping on, farmers.

Thank you Krista for taking the time to come out to the farm. It was terrific to meet you in person. I am glad you took an interest in learning more about where your food comes from. I 100% promise you that after having to crawl through pig poop to get the pigs feeder because they were messing around with it again the idea of bacon won’t be quite so sad.  One thing I should point out, heifer calves are usually not $30, more like $200. Penny was on clearance. As far as Penny under the tree for Christmas? Your cats and landlord sent me a strongly worded letter, they said no. Sorry!

Theme customization by Noir and Company