Catchy title? No, I am not going to tell you about how you should raise your kids or how kids should act in a public setting. Hubs and I don’t have kids and they aren’t even a certain part of our future. But there has been something on my mind for a while that I wanted to blog about, even though I am not a parent. So what qualifies me to talk about this subject? I was a kid once and I was a kid who ate…. “Hot Lunch”

School lunch has been making a lot of news lately, recent changes seem to have upset the natives and they are growing restless. Here in Wisconsin there have been students that have organized protests at their schools over the changes. This morning the news channel I was watching reported that participation in school lunch has dropped 7-8% at the schools they talked to.

So what’s the ruckus about? In an effort to reduce childhood obesity and encourage healthy eating habits the USDA has issued new guidelines for the school lunch program. These new guidelines require more fruits and vegetables, as well as reducing the overall caloric content of the meals and decreasing the amount of protein lunch contains.

I will be honest, the idea of reducing calories and encouraging healthy choices at lunch sounds like a great idea to me. The only real issue I had was that I didn’t think reducing the amount of protein allowed, the new guidelines reduce amounts of protein to just 2oz per day for kids in high school, was enough for growing kids. In fact the difference between the minimum amount of protein required for a Kindergartner and the maximum amount allowed for a high school senior is less than than an ounce a day.  That just doesn’t seem right to me.

So what’s an ounce of protein? First of all nutritional information shows protein content in grams not ounces. So I clarified that the USDA is referring to meat or meat substitute i.e. beans or cheese when they refer to allowed ounces of protein. I had to think about exactly how much an ounce of protein is. A slice of cheese is about an ounce and a piece of lunch meat from the deli is slightly under an ounce. A serving of protein according to those who decide these things is 3oz or 1 cup/8oz of milk. So let’s take a look at what the schools are serving for lunch and see how they make a balanced meal within the current allotments. 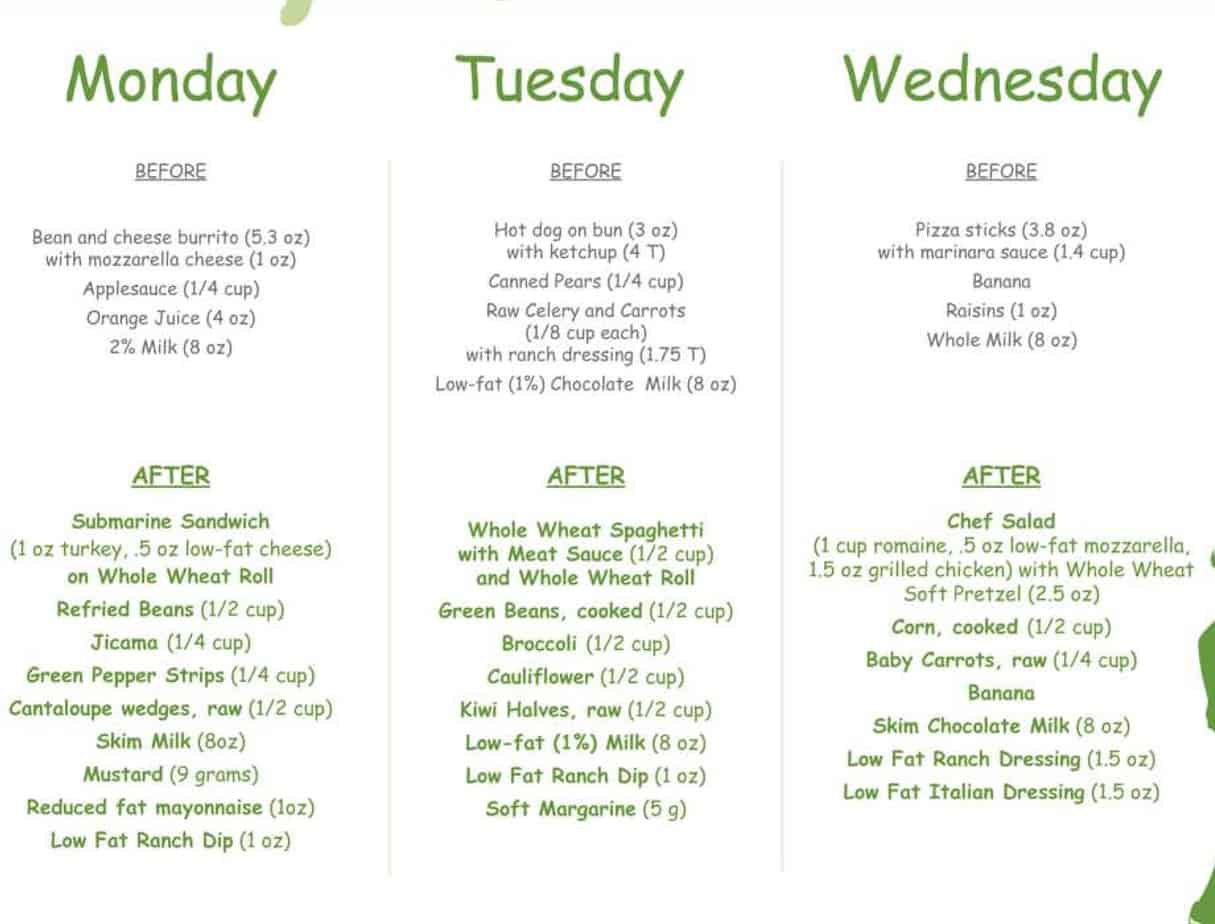 Click on the image to have it come up in a larger screen.

So first test I give the new menu is the same thing any school kid does… Which days would I eat hot lunch with this menu? Honestly, old or new this menu is a vast improvement over the Salisbury “steak” lunches that came in tin foil rectangles of my youth. I remember two lunches from my grade school days, pizza because I liked it and Salisbury steak because I was always hungry on those days. Hungry or not I wouldn’t eat it. The new menu sure has a lot of choices for kids. Kids should be able to find something they like. Except maybe on Monday, I know a lot of adults that hate refried beans, more for me I guess. I consider myself a bit of a foodie but I don’t think I have ever had Jicma in my life. Jicama is also called yambean, I guess they thought that Jicama sounded more appealing to kids than yambean, go figure.

Anyways I wanted to know what this meal added up to nutritionally wise so I plugged it into my food tracker. 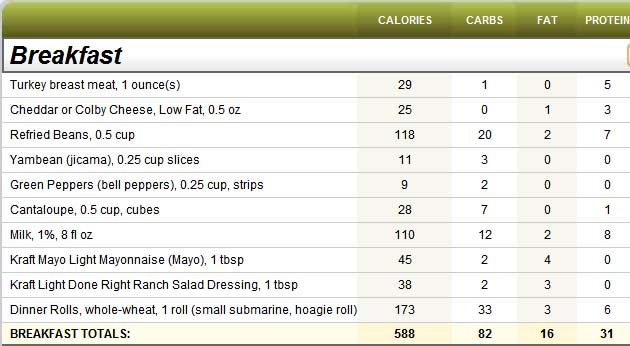 Ignore that it says breakfast … that doesn’t matter right now and I was in a hurry.

So 588 calories, 82 grams of carbs, 16 grams of fat and 31 grams of protein. According to my food tracker this all adds up to about a third of what I should have on a 1,500 calorie diet as an adult trying to loose weight. 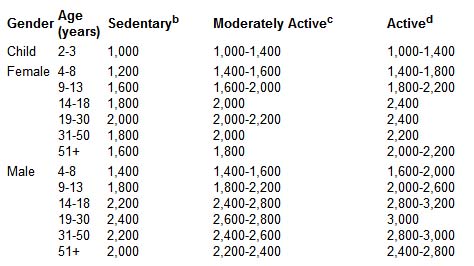 Well I guess I was off a little….

A small percentage of the kids in my 1,500 student high school were in a sport during any given season and we need to look at the larger percentage of kids when we make policy like this. Of course recess and gym also accounts for burning calories but let’s be honest, for a lot of kids that’s the only physical activity they get in a day and I don’t think that most of that accounts for the need of a ton of extra calories to make up for what was burned off by kick ball or the energy used being humiliated in the ‘social dance unit” of PE. So the meal on Monday only meets about 1/4 of the daily caloric needs for a moderately active high school kid.

So here is where the non parent part of my opinion comes in to play. This new lunch menu is putting a lot of responsibility on the other meals a kid eats in a day to close the gap. What happens if you’re a picky kid? You don’t like refried beans or raw green bell pepper and you’re not about to eat something that you can’t pronounce, where does this menu leave the picky kids?

Continue to ignore the Breakfast thing.

Ouch, If you’re a picky 15 year old kid you’re left with a small turkey and cheese sandwich, some melon and a carton of milk to get you through till the end of the day. And by small I mean small, remember these guidelines dictate that your sandwich has 1/2 a piece of cheese and one slice of turkey on it. Interesting that they allow you to have equal parts low fat mayo to actual meat on your sandwich. Now your picky kid lunch gives you 1/5 of the calories your high school body needs.

I am all for exposing kids to new tastes, textures and food experiences. But when I see this menu the memory of my father trying to force me to eat chicken gizzards when I was 5 keeps playing in my head. Sure maybe some kids request chicken gizzards and jicama for their birthday meal but I don’t know those kids. My nephews refused to eat the “inside out pizza” I made for them because they didn’t think it looked like pizza and since I had them help me prepare the meal they knew there were some green peppers in there somewhere and they didn’t like them…. These are the kids that I know and these kids would be coming home very hungry at the end of the day with this menu.

(To follow my blog just enter your email in the side bar under Follow Blog via Email just click the “Sign me up” button and you’ll get an email when I publish new posts.)

Previous Post: « Monroe, Wisconsin. Home of Cheese Days the happiest place on earth!
Next Post: So what are the kids eating? Part 2 »