Mercy For Animals, an animal rights activist group has released an undercover video from a dairy farm in New Mexico. The video shows workers treating the cows on this farm horribly. Their actions are clearly abusive and there is no defending or explaining what the video shows happening on this farm. As a dairy farmer seeing this video makes my stomach churn.

The video was recorded by a Mercy For Animals activist who obtained employment at the farm specifically to find footage that would make a video that Mercy For Animals could use in their war against animal agriculture. This farm provided a jackpot of material to do just what MFA was after.

After the people who own the dairy were alerted to the abuse inflicted by some of their workers they took very swift and very drastic action to protect their cows from further abuse. Not only did they fire all of the employees on the farm, they also referred the employees responsible for the abuse to the local police. Then they took it a step further, 12 hours after they found out about the abuse they started moving all of their cows to other farms that they trusted. Within 24 hours, they had completely shut down their dairy farm. That’s simply stunning. While I wish the abuse had never happened, I am impressed with the actions this farm has taken to protect their cows.

It is important to note that Mercy For Animals isn’t only about ensuring animals are well cared for, MFA believes that animals have the same basic rights as humans and therefore want to stop all people from eating any animal product, including meat, milk and eggs. This year it seems that the various animal rights organizations have decided to focus on dairy farmers. The few undercover videos released this year are their attempts to erode the trust people have in dairy farmers like myself and get them to give up dairy products altogether. Of course these organizations don’t share how many farms their undercover activists go to and come back without any evidence of abuse.

While videos like this show abuse can happen on individual farms, they certainly don’t show how we do things on our farm or how our friends and neighbors do things on their farms. There are over 49,000 dairy farm families in the US and even when I include the bogus PETA video, I count 4 videos that have been released from dairy farms in the last year or so. That equals about .008% in case you’re wondering.

So, should you give up dairy products because of this video? Following the logic that Mercy For Animals and PETA use, people who don’t want children to be abused must stop buying anything produced by anyone who has children because a very small percentage of parents abuse their children. Does it seem right to you to paint all parents with a wide brush like that? Why is it ok for Mercy For Animals to paint me and my family and all the other dairy farm families just like us out there as animal abusers and ask you to stop buying our products?

I hope that the people shown abusing cows in this video will be prosecuted and held responsible for their actions. I hope that they never are allowed around animals again. I hope that this will be a wake up call to any dairy farmer with employees to be watching their people more closely and to be more diligent in hiring compassionate and kind people to work with their cows. Most of all I hope that you will not hold this video against our family and the rest of America’s dairy farmers because this is not how we do things. We love our cows. 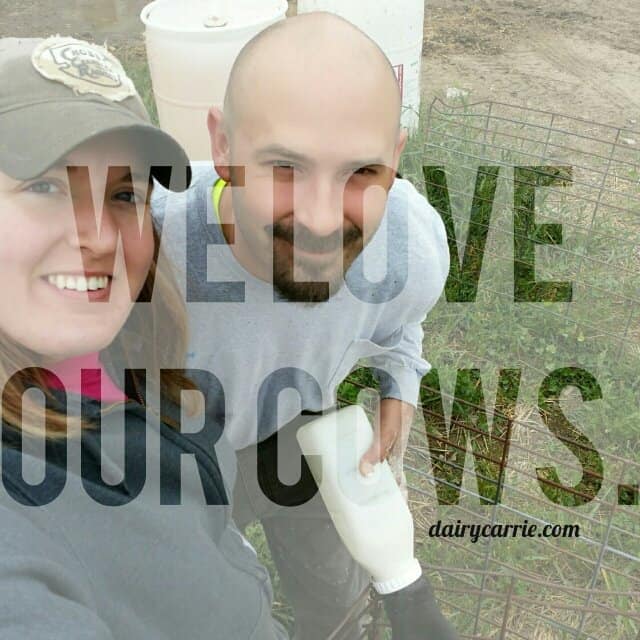