Did you know that there is more than one type of corn harvesting going on right now? 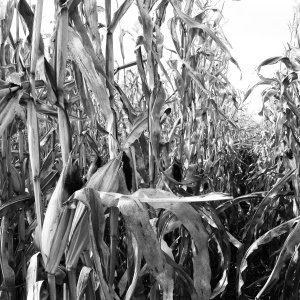 On our farm we grow and harvest corn that will later be fed to our cows as a portion of their overall diet called High Moisture Corn or HMC. Unlike shell corn, which is harvested and stored in grain bins and needs to be dry to prevent it from spoiling, high moisture corn is fermented and stored in silos or other airtight storage options. 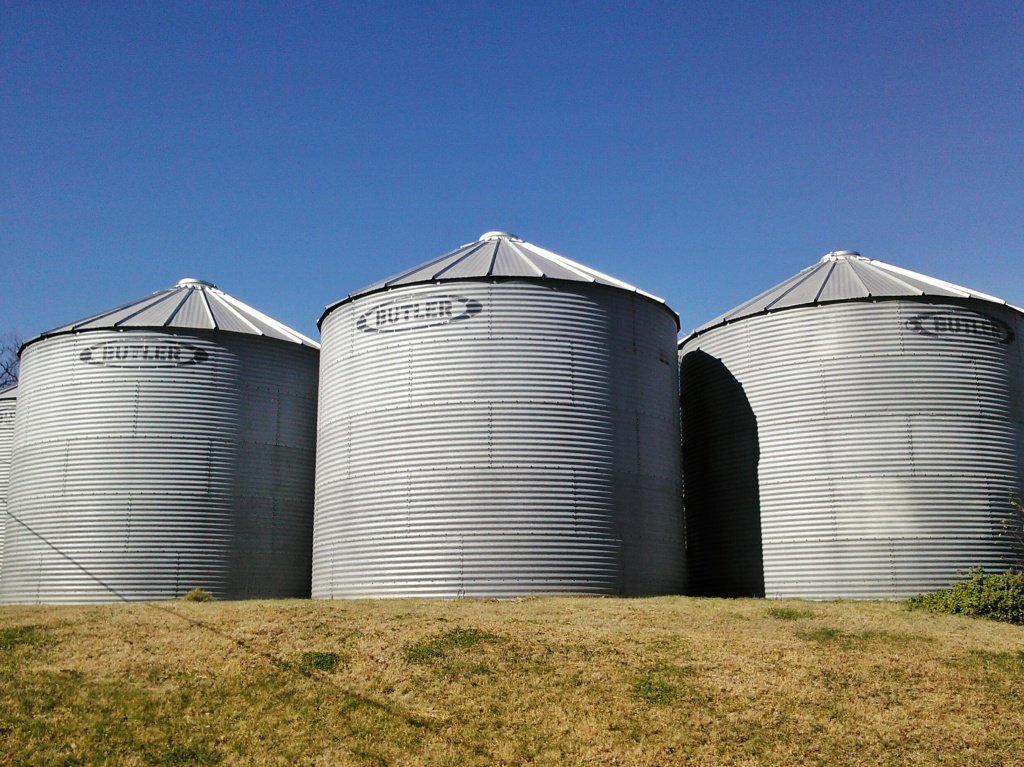 These are grain bins. Unlike a silo, bins are used to store dry feeds like corn or soybeans. Shell corn is considered dry at 15.5% moisture. Shell corn is also used to feed animals as well as for fuel and many other uses.  Thanks to my friend Nicole for sending me a photo of their grain bins. Click on this photo to visit her blog!

Before harvest ever starts, there is a lot of prep work to do, we must get the silos ready to hold the corn.

Before we can refill our silos we have to make sure the silo unloader is ready to be lifted to the top of the silo. As you can see, a corn silo is a dusty place! 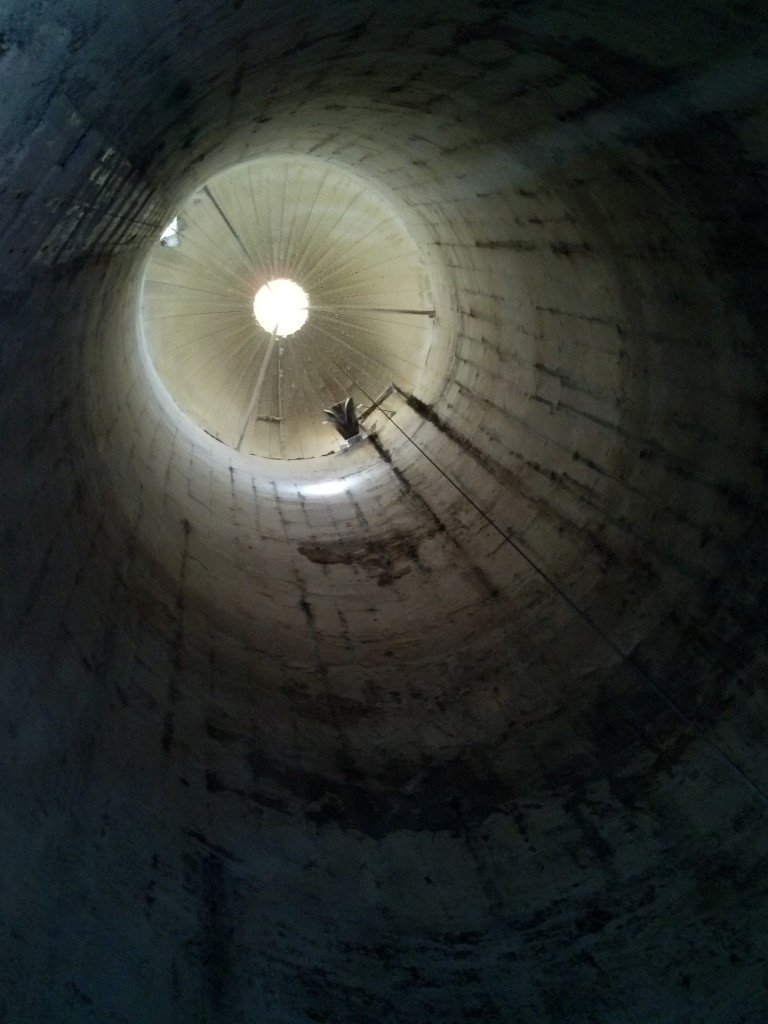 This is what the silo looks like from the bottom when it’s empty. The spot on the top of the silo isn’t actually open, it’s a window that lets light into the silo so it’s not pitch black when you’re trying to work in the silo.

Once the silos are ready to go, we head to the fields and start harvesting our corn. Here is the quick and skinny on how it is harvested and stored. You may want to turn your volume down on the computer, it’s hard to get video of large equipment without large noise.

Even though the corn plants are brown and dead that doesn't mean this corn is ready to harvest. The kernels are still quite wet and aren't ready to be combined. #corn #wisconsin #Harvest14 #fall #learning

This is high moisture corn. It looks like shell corn but it has (surprise!) a higher moisture content. If this was shell corn, Hubs wouldn’t be able to easily crush the kernels with his fingers.

This is how we moisture test the corn. The last video showed corn that was too wet. This corn was planted earlier and is running about 23% moisture. Usually we aim for it to be 25-30% moisture but this will still work. #Harvest14 #corn #wisconsin #fall #learning #farm #AgChat #farming

We don’t just randomly guess at how much moisture is in our corn, not only does the combine have a moisture sensor, we have a tester that reads the moisture content of our corn. Ideally high moisture corn will be 25-30% moisture. This field was 23.3% so slightly on the dry side but not too bad. 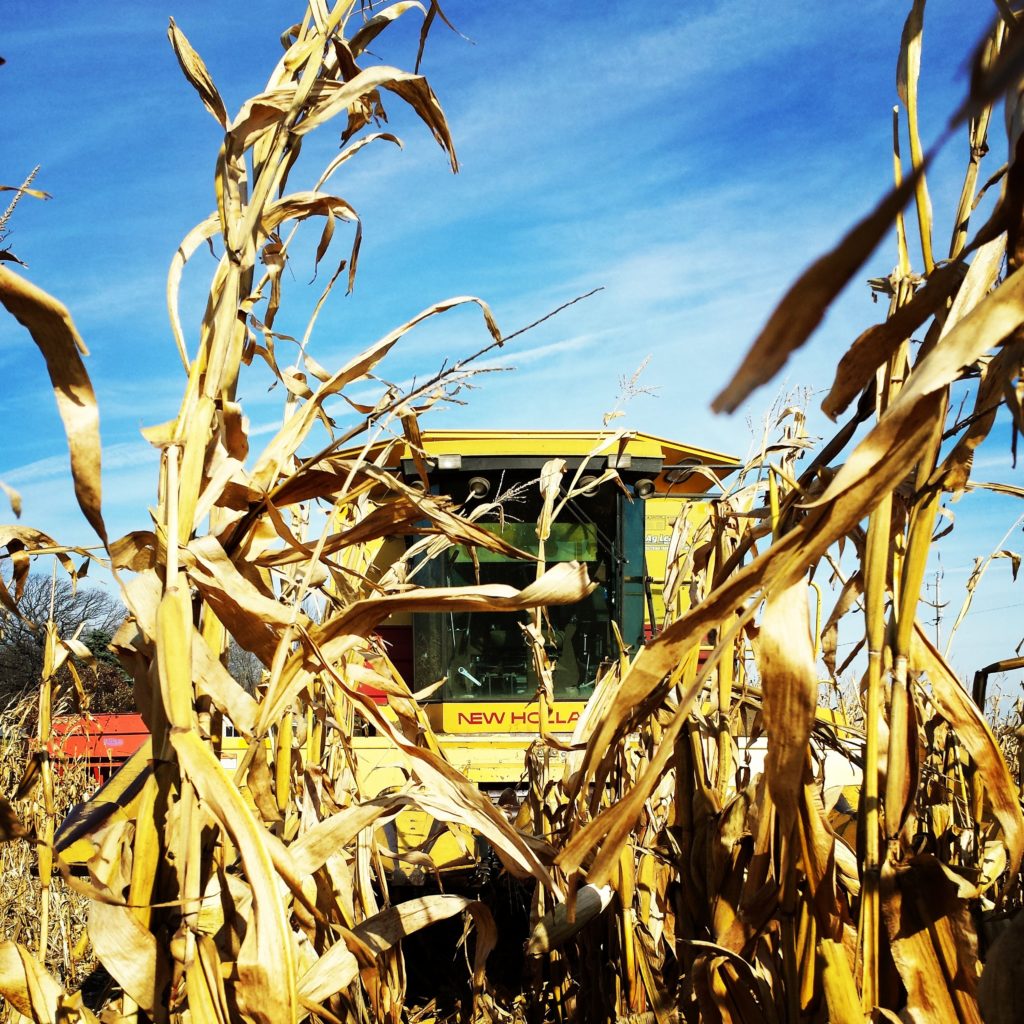 To harvest the corn, we have our neighbor/Hub’s cousin come with his combine to harvest for us. It doesn’t make sense for our farm to own a combine that would only be used for about a week each year.

The combine harvests the corn and then puts it into a bin that we can haul back to the farm. We usually have two people on tractors running bins of corn back and forth between the field and the farm so that the combine can keep rolling. 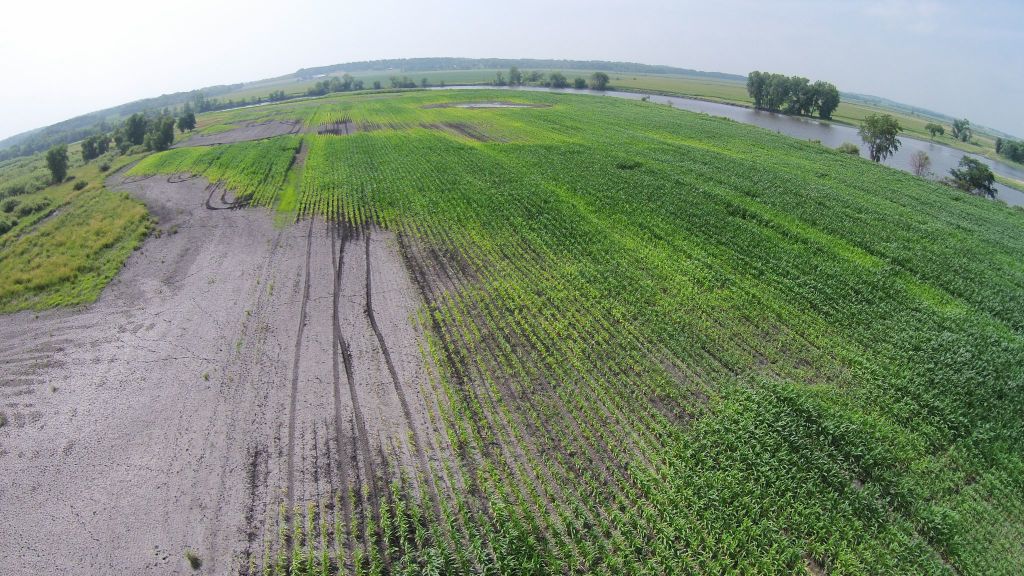 We’re lucky that this ground gave us any corn this year after a very wet spring. Here is what the field in the video looked like earlier this summer. The bald spots are where the corn we planted drowned after too much rain this spring. You can see the Crawfish river in the background.

After we haul the corn back to the farm we put it in the silos. On our farm we add an additional step before this happens by running it through a hammer mill that crushes the kernels. This makes the corn easier for our cows to break down and utilize the energy when they eat it. Some farms use a hammer mill when they pull the corn out of the silo to feed it.

The funny thing about using something that pulverizes the corn before flinging it up the silo is that we end up with corn flour everywhere! 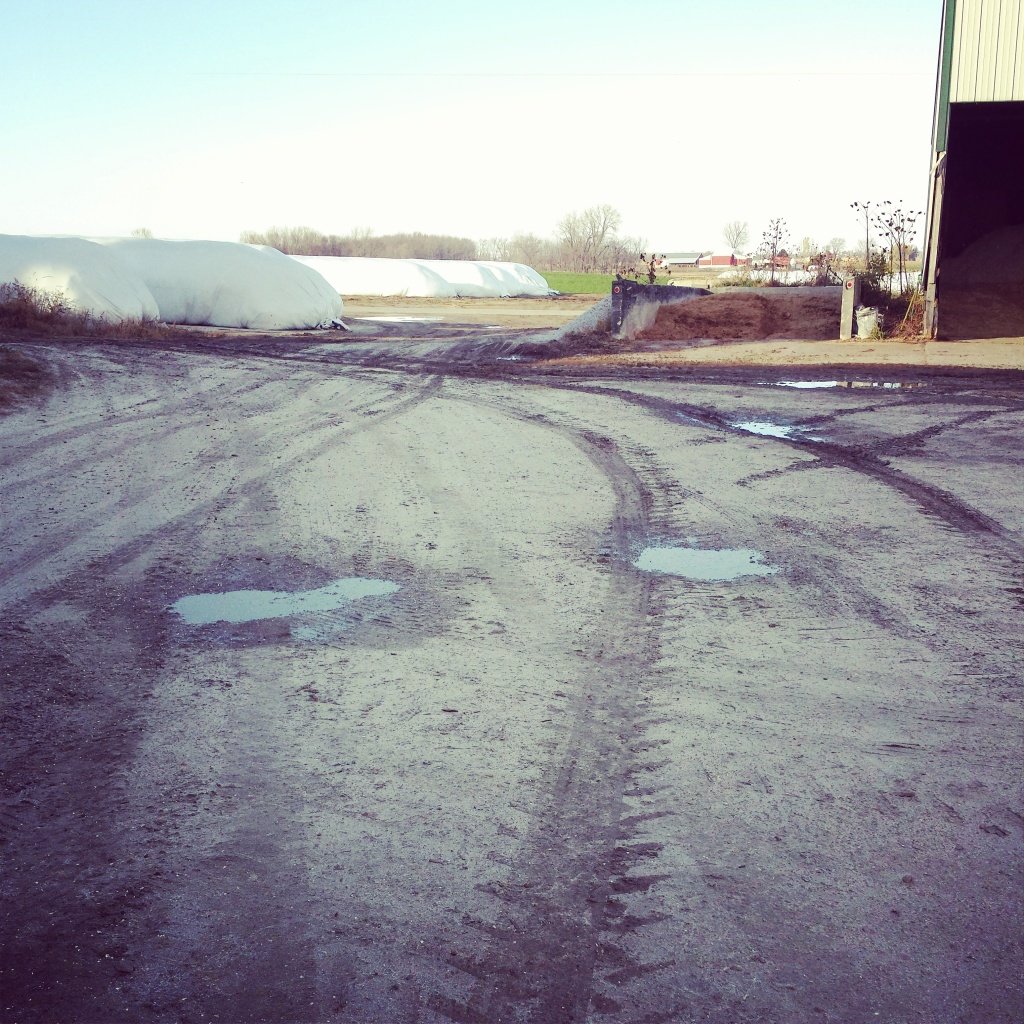 No that isn’t snow or frost, it’s corn dust! 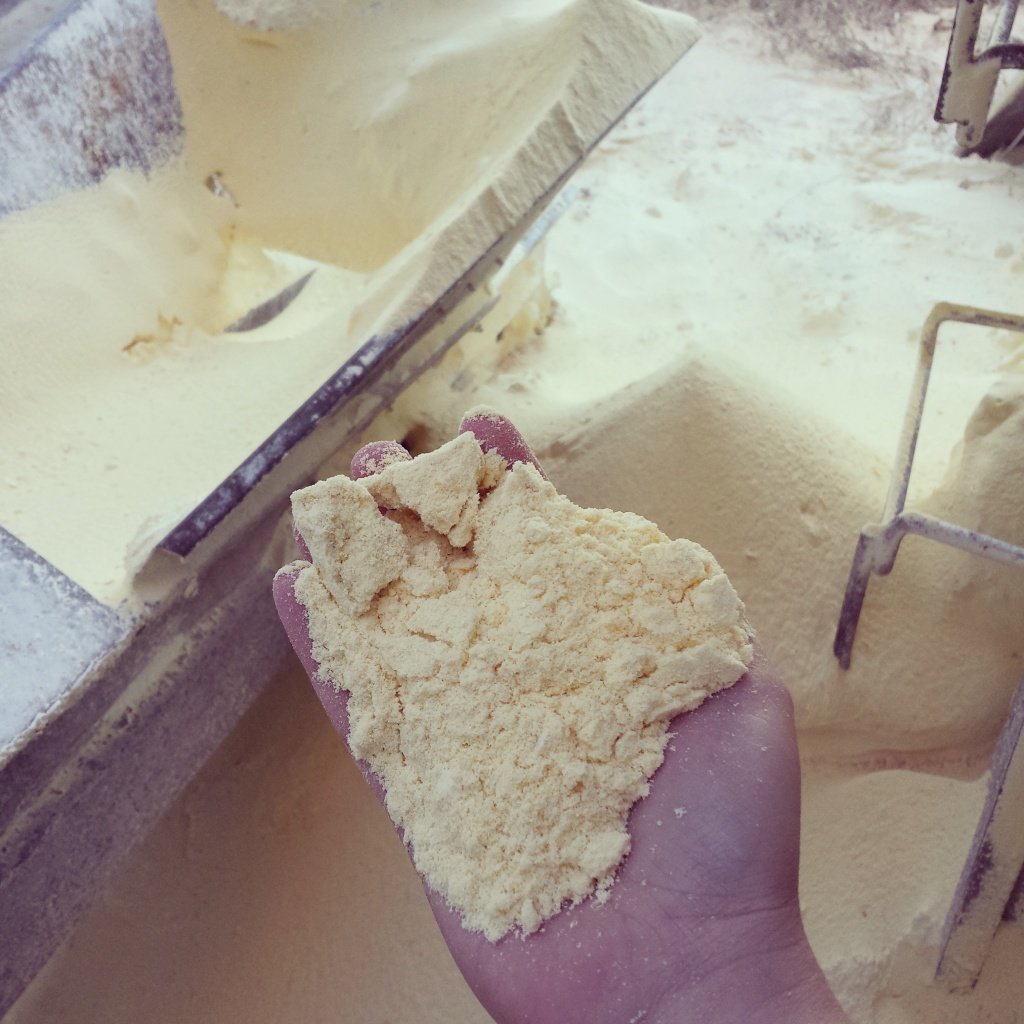 What goes up, must come down right? The little particles of flour that escape when the corn is crushed and sent up the silo collect at the bottom of the silo chute.

Hubs remembers his mom making pancakes out of this flour. Of course I meant to grab a ziplock bag full but I forgot and then it rained. Corn flour paste probably doesn’t make very good pancakes.

This last year we planted about 180 of our 300 acres with corn, most of that was harvested for corn silage which is the entire corn plant, not just the kernels. This year we harvested about 85 acres of that 180 acres for high moisture corn. The 85 acres gave us enough to last us about 15-16 months according to Hub’s math. We were going to include more exact calculations but I can’t math and trying to figure it out exactly was making us fight. 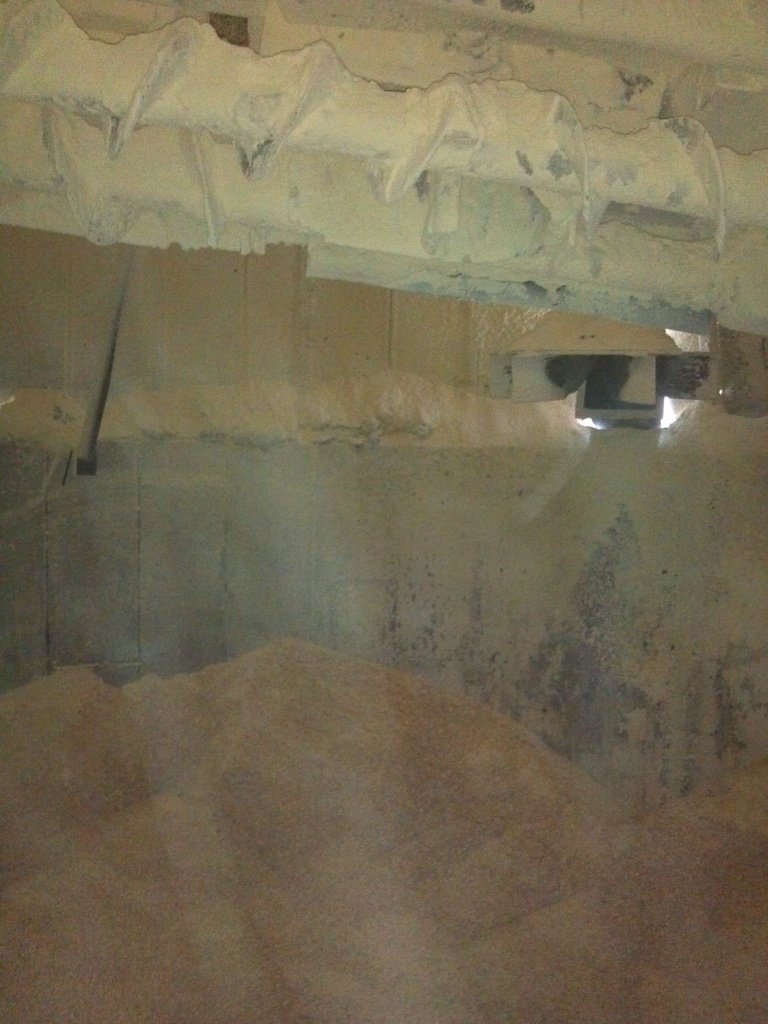 This is (a bad photo of) the silo full of corn. This year we filled one silo full and another silo about half full.

Now that our corn silage is done, our soybeans are harvested and taken to the coop in town and high moisture corn harvest is all done, we can feel the relief of knowing that we have enough feed for our cows for the next year. But the work is far from done. We still have fall tillage to do and lots of things to get ready on the farm before winter sets in.

Previous Post: « Mantua, Italy- Corte Virgiliana- Dairy Farm and Agriturismo
Next Post: Despite what Mercy For Animals wants you to think, we don’t abuse our cows. #RealWiDairy »