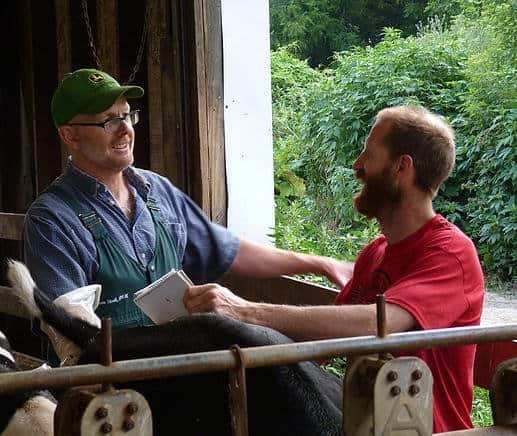 “By way of early admission, I am the definition of a cradle flatlander. I was raised by a git-er-done construction working dad and a stay at home mom in a town of 100,000 and shrinking. Two generations removed from the family farm, I can relate.  I attended the University of Illinois and started Vet school in August 1988. The notion of living North of the cheddar curtain never crossed my mind.  The summer that preceded my freshman year I was consumed by two thoughts; graduating and getting a date with a girl named Barb Hanek. She asked if I would like to spend the weekend in LaCrosse with her family? The words were not out before I had a full tank of gas and a feed sack full of Illini super-sweet corn in the back seat of my 1974 Plymouth Valiant. I was Northbound.

Ten years later I finished palpating a herd of hobby Herefords on Mulderink Hill overlooking I-94 West of Lake Mills. As I scrubbed my boots and talked with Dave about the decline of youth I mused as to the destination of the SUV’s and pickup trucks in the distance. Halfway out his drive I skidded to a stop in the gravel and slapped my forehead.  A decade before, with Barb snoring on my lap, a cup of gas station mud and a wad of chew keeping me between the lines, the sun rose on the America’s Dairy land. My very first vision of the state of Wisconsin was a hip-roof dairy barn with a mural painted on the end, on my right. Out my drivers-side window was a Lutheran Church and a Norman-Rockwell Guernsey farm nestled in a valley of pine.

On May 15th 1992 I turned my tassel and owned the title DVM. On June the 15th I drove down Joe Spoke’s drive to correct a left DA. My first snap-shot of the state of Wisconsin became home.  According to the Bank of Lake Mills, I’ll be here for another 60, if I don’t miss any payments.

In 22 years of practicing as a country vet I have been inspired, humbled and in general awe of farmers. Their super-human depth of character, strength, tenacity and generosity define them. They are stewards of this magnificent land, agents of animal welfare, feed the world and are the outright underpinning of our economy.“

Dr. Stork is the Veterinarian behind your food. Think of him when you enjoy a glass or milk or a pork chop.

You can read more of Dr. Stork’s writings in his wonderful new book; In Herriot’s Shadow. Available at DrBillStork.com