Today I packed up Silas and headed to the grocery store. I hate grocery shopping because it never fails that I will see some sort of label claim or marketing gimmick that will leave me annoyed. Couple that with people’s seemingly endless propensity to annoy me with their self absorbed antics, and I could argue that getting food for our family is why I drink. However, I was out of coffee so I really couldn’t put off the dreaded trip any longer.

As I pulled into the parking lot from the secret back driveway I use to avoid traffic, I noticed a man standing on the median holding a sign. His back was to me and at first I figured he was holding a sign advertising $5 pizzas or whatever deal the Papa Murphy’s behind him had going on. As I turned the corner I had the chance to quickly skim the sign. In sharpie marker on a white background the words rent, 2 kids and hungry popped out at me. Then I made the mistake of making uncomfortable eye contact with the man holding the sign and I kept driving.

I found a spot in the parking lot where he could see me. As I pulled my baby in his car seat out of the car I hoped he would see me, realize I too had my own child to feed and wouldn’t have hard feelings for the moment of eye contact that didn’t result in him getting any cash. As I walked into the store and grabbed my cart, a flood of thoughts washed over me.

We are not poor. We are not rich. We mostly have what we need, we don’t have all that we want. We pay our bills, not always on time. I’ve been known to buy cauliflower and let it rot in the fridge next to the plate of meat I took out to defrost and forgot about.

I’m also a person who cares about the people around me. I’m a Christian and believe that God calls us to help others. We grow an acre of sweet corn each year that we donate to our local food bank. I helped that same food bank develop an idea where people can adopt dairy cows and donate the milk to those in need. I once won a year’s supply of cheese and I donated it to our local food pantry. I give because I care.

As I filled my cart with both on sale, generic items and expensive specialty coffee, I continued to wrestle with my thoughts. When I passed a massive can of beans, I thought about putting them in my cart and giving them to the man with the sign. The same though popped up as I passed the mac and cheese. Both times I stopped myself from reaching for the food.

Several years ago I was a bartender at a bar near downtown Madison. It was my part time job that helped fill the gaps my full time job couldn’t.  Not far from the bar was a wooded city park where a group of homeless men had an encampment.  I’d see these men panhandling with their signs on my way from my main job to my job bartending. Often after dark I would see them again when they would come into the bar order a pitcher of beer and a basket of fries to share. When their beer and fries were done, the game machines in the corner that have signs proclaiming them to be for entertainment only but who everyone knows has payouts for winning from the bar, would draw their attention and the dollars that some kind hearted person handed over hoping it would help.

I know that often, homelessness and it’s best friend hunger, are symptoms of mental illness and addiction. My personal experiences combined with the anecdotes you hear about panhandlers making solid wages off of unsuspecting saps leaves me conflicted. When I see someone with a sign proclaiming their bad luck, I find myself judging them, trying to decide if I feel they are honestly in need or if they are scamming me.

Ultimately I didn’t buy any food for the man with the sign. An hour after I first walked into the grocery store, I walked back out and there the man with the sign still stood. He was bundled up more than the 35° temps called for, in clothes that looked to be fairly new. The thought crossed my mind that maybe this was a church pastor and secretly someone was hiding, filming the interactions he had for the next viral YouTube video encouraging us to be better people. It was misting lightly and there he stood. Unprompted by the thought of a viral video, as I walked to my car with my baby and my food I made the decision that I would open my wallet and give whatever cash I had to him. I don’t usually carry cash, I had no idea how much I might find and I figured that if I opened my wallet and found no cash, then that was my answer.

As I drove past the man with the sign I slowed my car and rolled down my window. I handed him the $5 bill I had found in my wallet. In my mind I was going to ask his name and about his story. I wanted to know more. I wanted some proof that his need was real. The only words I managed to stammer out as he reached into my car, “this is the only cash I have” with a shrug of my shoulders for added effect. He responded with a simple “thank you” in an accent I couldn’t place and I drove away not knowing if I had judged him correctly. Maybe I fed an addiction, maybe I fed his kids, I’ll never know. 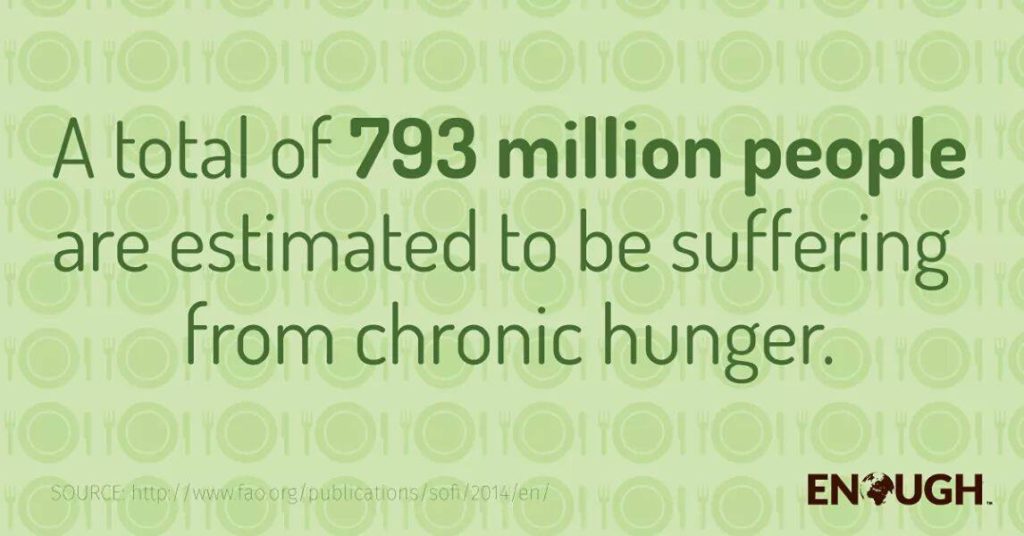 Graphic courtesy of the Enough Movement.

The Hungry Truth– Hunger is a complex issue. I hope to explore some of the many facets of hunger in this series of monthly blog posts. I hope you’ll follow along as I show the honest truth about hunger. These won’t be comfortable and light topics but I hope they will inspire thought and even more so, action in you. As always, I appreciate your time in reading my blog and I hope this blog series will help a few more people go to bed with a full belly at the end of the day.