So clearly my intentions to write one post a month focusing on hunger hasn’t worked out the way I hoped. I blame having a toddler, a farm and launching a new business for taking up all of my time. No worries though, I intend to keep up with posts in this series whenever I can.

A couple of weeks ago I headed to Washington D.C. to join a few other dairy farmers from around the country at an event called The Washington Ideas Forum. The event was put on by The Atlantic and the Aspen Institute had some seriously high level speakers, from Speaker of the House Paul Ryan and Secretary John Kerry to multiple CEOs of major companies to General Purvez Musharraf, former President of Pakistan and they covered a wide range of topics. As you can imagine, the 1,500 conference attendees covered a wide cross section of people. I personally talked with CEOs, Investors, Political Staffers, Students and Writers. 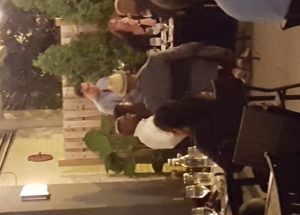 We kept ourselves pretty busy in DC so I didn’t have time to see the sights, but I did snap this out of focus picture of Taye Diggs eating at the restaurant in our hotel. 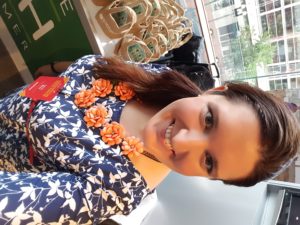 I clean up pretty OK! We gave away Cow Pots (flower pots made out of recycled cow manure) to attendees.

So why would a dairy organization want farmers to attend a conference like the Ideas Forum and what does this all have to do with hunger? I’m glad you asked. We attended as part of a sponsorship of the event by the Innovation Center for US Dairy. Sue McCloskey, Co-Owner of Fairlife and Fair Oaks Farms took the stage and discussed the ways our industry is innovating and becoming more sustainable while dairy farmers, Steve Ballard from Idaho, Skip Hardie from New York, John Larson from Florida and I spent the entire conference talking to other attendees about farming. At the end of the conference we all agreed that the questions and conversations we took part in were fantastic.  You can’t expect everyone to come to the farm, so sometimes you need to take the farmer to the places people are at. This event accomplished just that.

Check out Sue’s quick 10 minute talk on innovation in the dairy industry below.

While the conference wasn’t focused on food or farming as a whole, our group of farmers did attend a lunch panel sponsored by the Innovation Center for US Dairy called “Food For Thought” featuring three panelists with unique views on food.

Each panelist had a unique view on food. Marjorie Meek-Bradley is a former Top Chef competitor and owns several restaurants in the DC area. Danielle Vogel owns a small chain of grocery stores that only offers food grown and produced in areas surrounding DC and Marie Rose Belding is the creator of an online program that helps connect food pantries with food donations in an efficient and productive manner.

The discussion on the panel is what inspired this post.

I will start off by saying that I think what each of these ladies is doing is really cool. I would love to check out a grocery store that is as focused on local foods as Danielle’s store is. Marjorie’s restaurants sound delicious, trendy and fun. Hearing the story of how Marie saw a problem with distributing food to where it was needed and coming up with a solution was inspiring and between the points she made on the panel and our brief conversation after, I can say she is made of the same stuff heroes are made of. These women were all awe inspiring for following their passion and doing big things.

The discussion surrounding food once the panel got rocking was thought provoking. After answering a few questions with ideas that I could fully support, the conversation from the 2/3 of the panel who’s customers not only had food but also had disposable income to spend on more expensive than average food, took a turn. Suddenly food had been doused with chemicals by farmers, organic was superior in taste and nutrition and the great divide between privilege and need was on display for all to see. As the moderated conversation ended and the panel took questions from the audience, our group of farmers was decidedly annoyed by the unrealistic picture painted of us and other conventional farmers. A few audience questions continued the discussion down the same path when I finally got to ask the last question.
I introduced myself as a woman who has a small family farm where all the cows have names and go out to pasture. I explained that our farm was the type of farm that many people picture when they buy a gallon of milk but also grows GMOs and uses pesticides when it’s called for. Then I asked the panel “how do you promote what you do without making farmers like me out to be the villain?”

I’m not sure the panelist knew there were farmers in the group.

While there was only time for one panelist to answer my question, I think what she said was the perfect answer to get everyone thinking about the divide between have and have not. A paraphrase of Chef Marjorie’s answer because I didn’t have time to write it down was that when she went to the grocery store she refused to buy Smithfield pork but she didn’t know why that was the case. She thought maybe she had seen a video or a story at some point that convinced her that the brand was a bad thing to buy and she had never thought about the farmers behind the brand. She ended with saying that maybe she should take more time to think about why she holds the ideas she does.

I grow heirloom tomatoes in my garden because I have the luxury of garden space and I think heirloom tomatoes are delicious. I love shopping at the Madison Farmer’s Market even though I can’t afford to shop there regularly. I have been the kid on free lunch at school and I have also spent $10 on a single loaf of delicious bread from the bakery in our town.  You won’t find me bashing organic farmers or big conventional farms because I see the need for both. I wonder how much easier it would be for all of us to focus on the important things like making sure kids aren’t going to bed hungry if we stopped pushing our personal food values on others.

When it comes down to it, there is clearly a market for all local grocery stores and there are more restaurants today than ever because people eat out more than ever. At the same time there is an undeniable need for the program that Marie developed that helps to feed hungry people. The lunch panel served as a good reminder that when those who have the privilege to shop and eat where they like promote their choice at the expense of those who have need in place of privilege, no one wins.

As always my posts are 100% reflective of my personal opinion. My travel costs and registration for this conference were covered by Dairy Management Inc, our national milk checkoff association.