Top
You are here: Home / Learn More About Farming / What do you do when a cow breaks her leg?

In life often times, shit happens. This is also true on a dairy farm. Sunday morning we were starting to enjoy a sunny and incredibly warm day when I got a text that we had a “Down” cow. A down cow is a cow that for some reason is laying down and wont get up, it is not how you want to start a day. Cows can go down for several reasons. Sometimes it’s because there is a metabolic issue that needs to be corrected, sometimes a cow is ill and doesn’t want to get up and sometimes it’s due to an injury. When a dairy farmer has a down cow it’s a very serious situation and requires a quick diagnosis and treatment. The longer a cow is down the less likely she will ever get up again.

So Sunday morning Ripp the cow was found lying down in the dry cow pen and was unable to get up. Ripp is a dry cow which means that she is currently on vacation from milking. She is due to calve in about 40 days. We had checked the cows Saturday night before bed and all was calm. Sometime during the night Ripp had done something that caused her to break her rear leg. When the dry cows were fed early Sunday morning we got a text from the Herdsman that we had a problem. 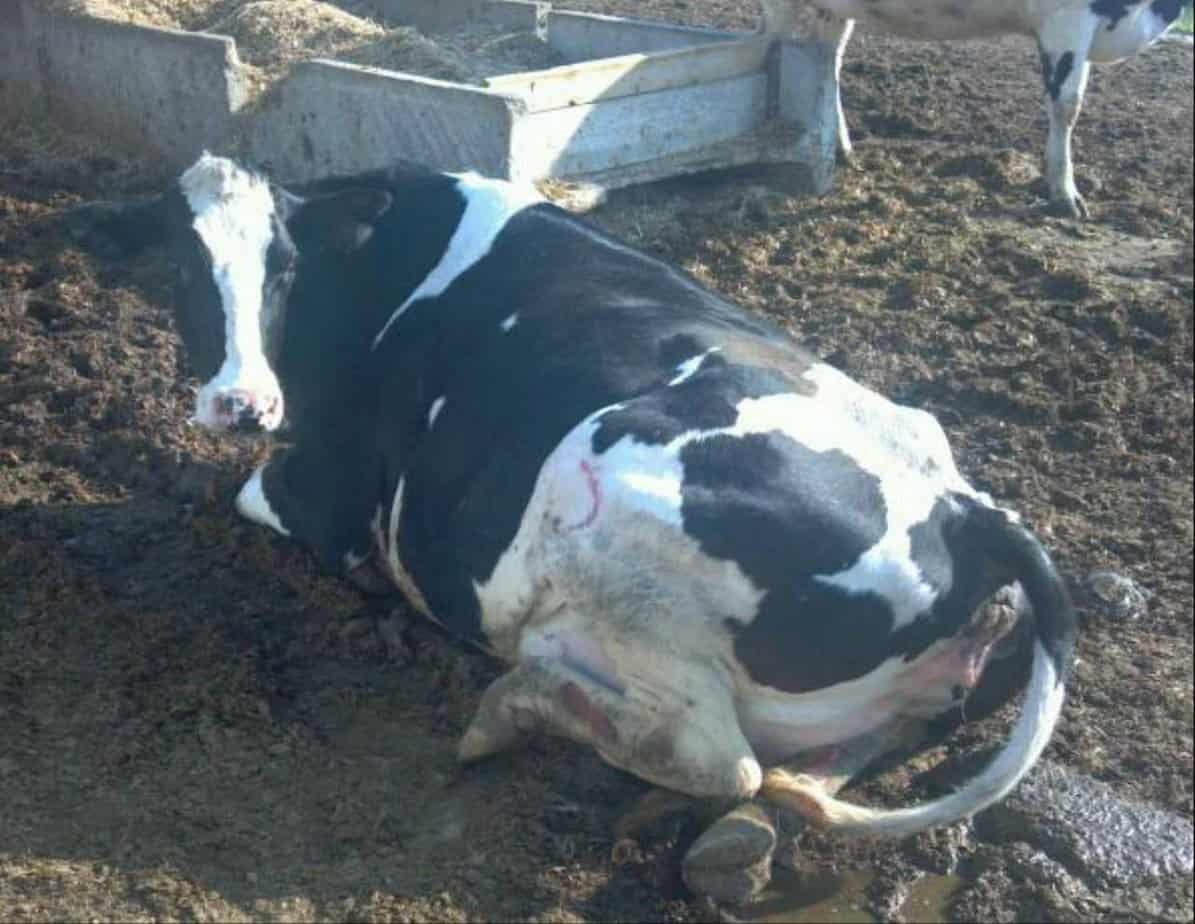 This is the situation we found on Sunday morning. The red stuff on her legs is not blood. It is pink marking pain that the cows get when they are dried off and so that no one  milks them by accident.

We quickly ran through the options of what could be causing her to not want to get up. A pair of eyes was really all we needed to see that she had an injury to her leg. However we weren’t sure the extent of the injury and we were hoping for the best so we called the “float tank guy” in to help. A float tank is like water therapy for cows. It’s a tool that dairy farmers can use to help a cow stand without placing all of her weight on an injured leg. It’s something that generally a farmer doesn’t own themselves because it isn’t used very often. Thankfully there are a few people around the area that will bring out a float tank to your farm and rent them to you. Shortly after we called the “float tank guy” was on his way to our farm to help us get Ripp feeling better. 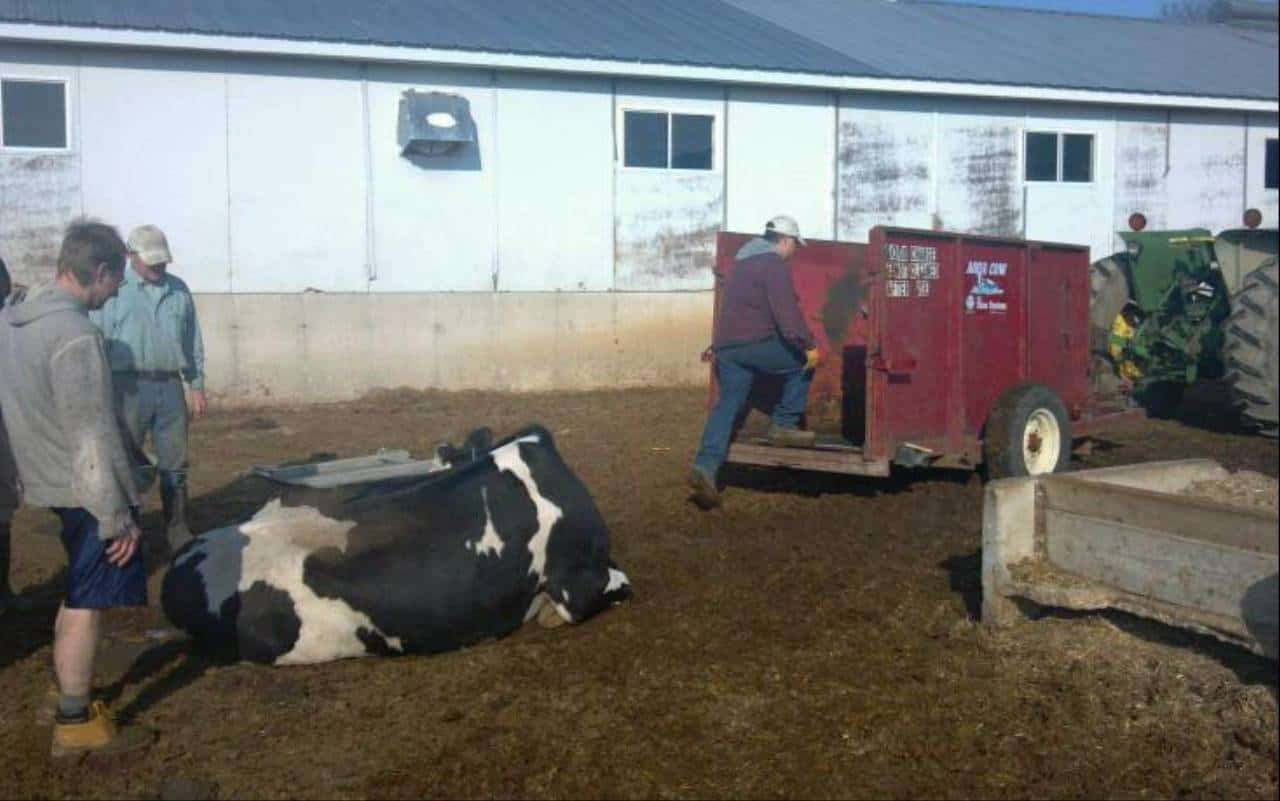 The tank is pretty light when it’s empty. It’s on wheels so we can get it close to the cow and not have to move her very far. 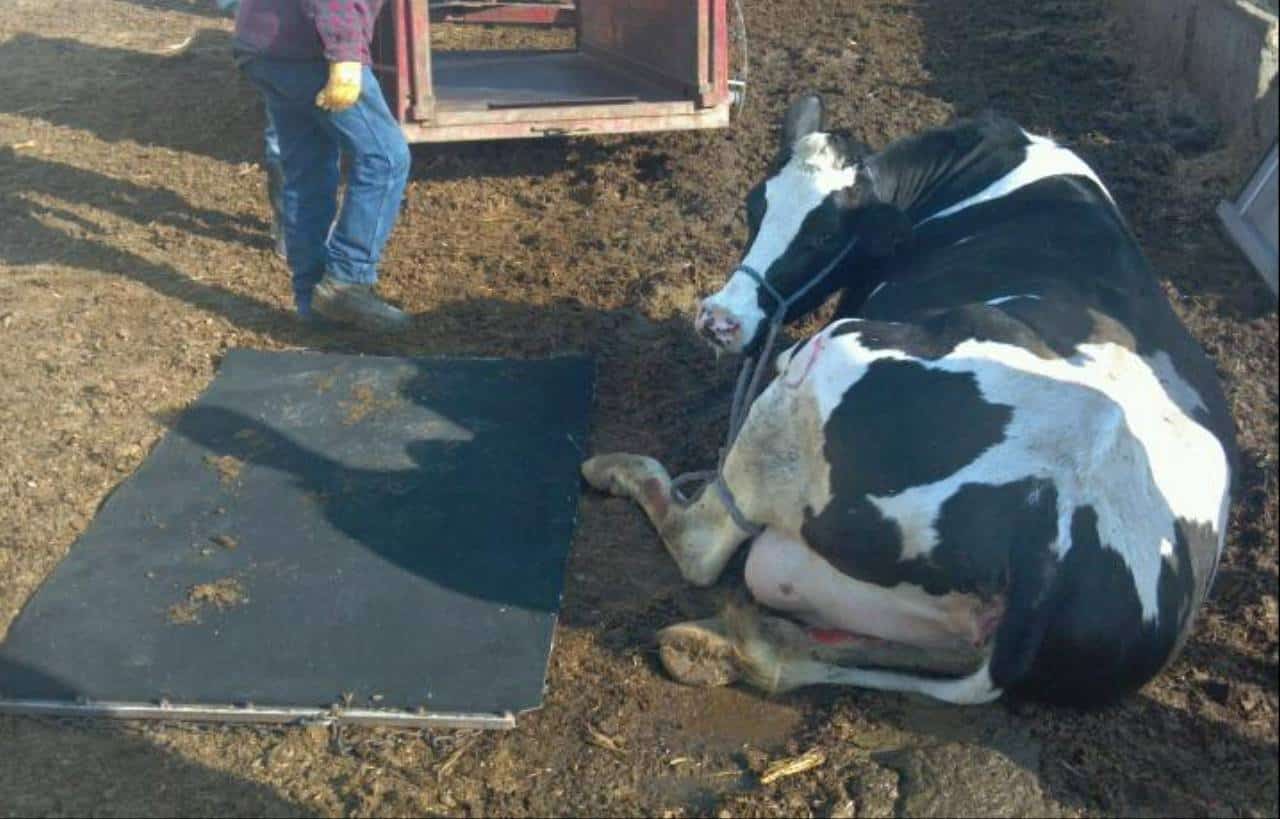 First step is to put a halter on the cows head and tie the rope to her leg so that we can safely roll her onto the “magic carpet” that will take her into the tank. 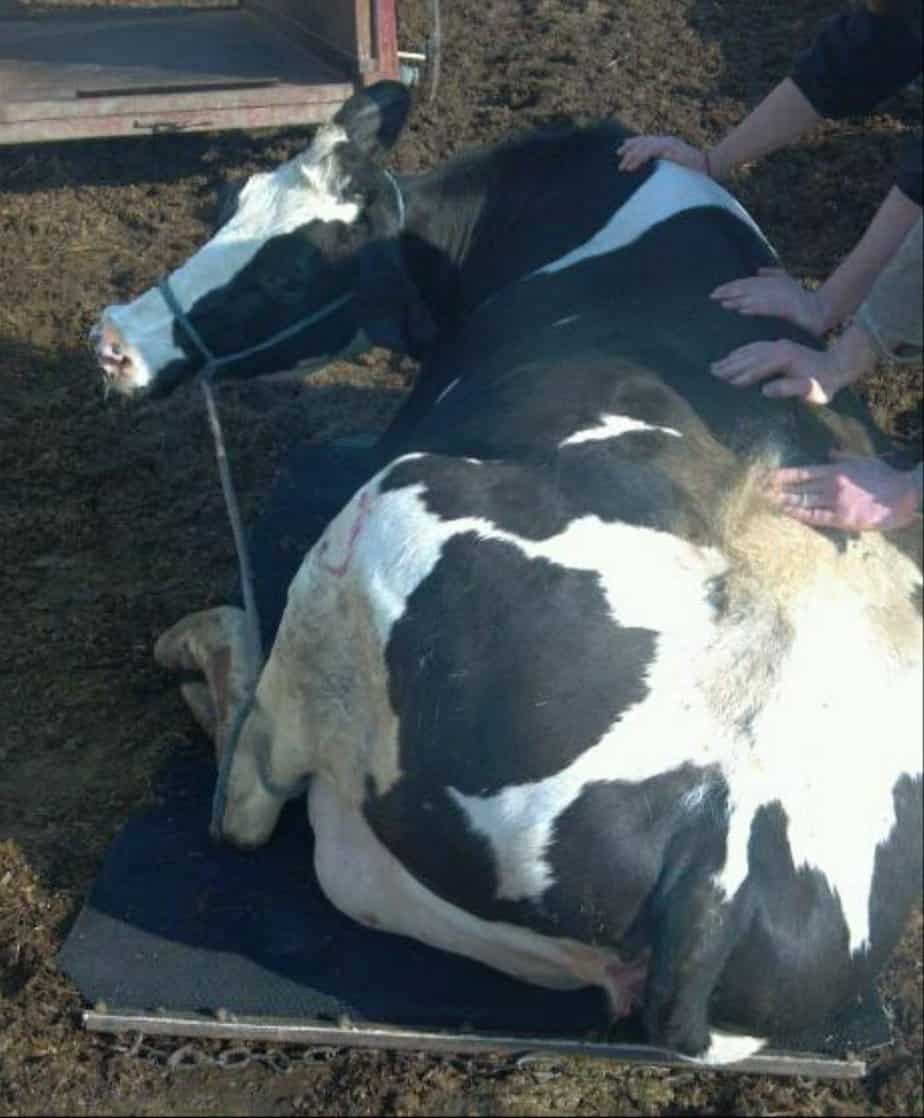 It takes lots of hands to make this work. 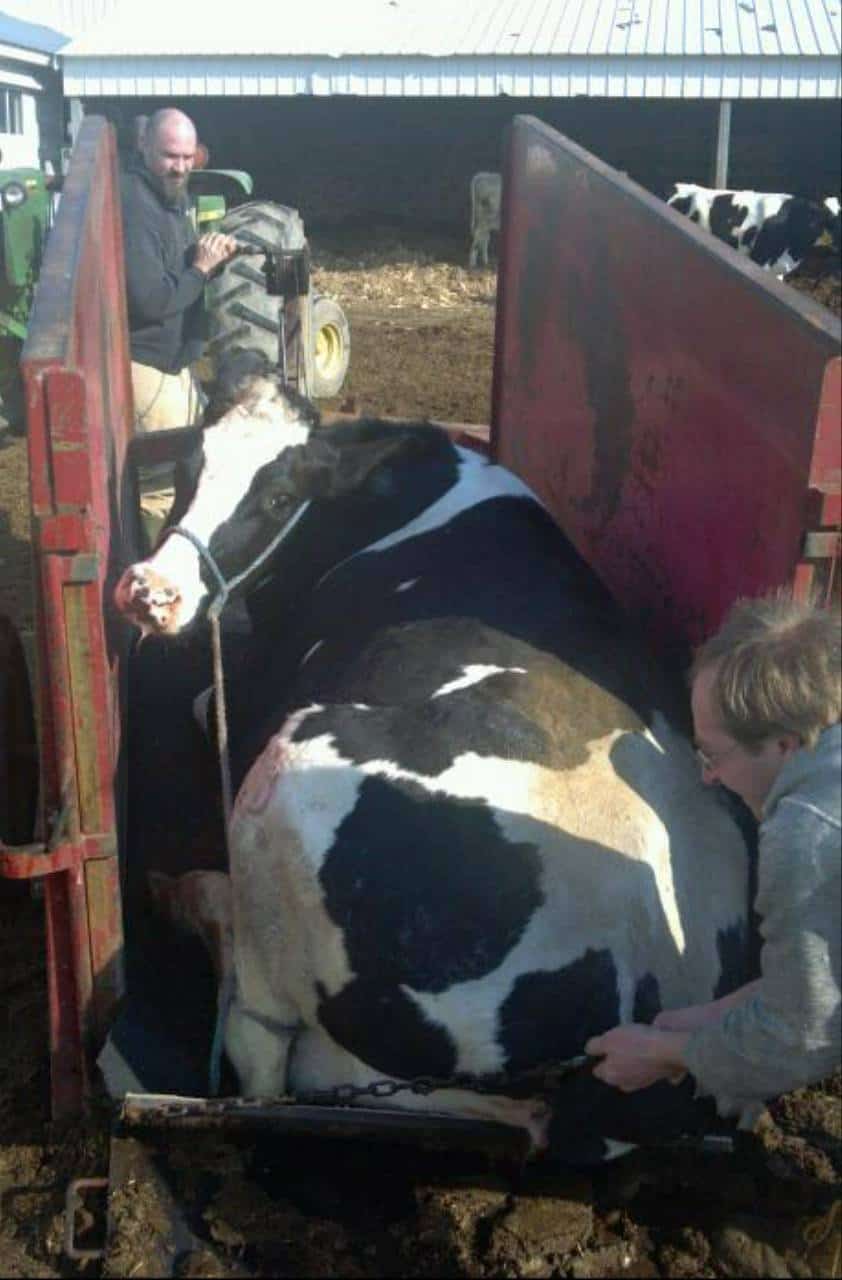 Once we got Ripp onto the “magic carpet” we hooked a chain to the carpet and slowly winched her into the tank. 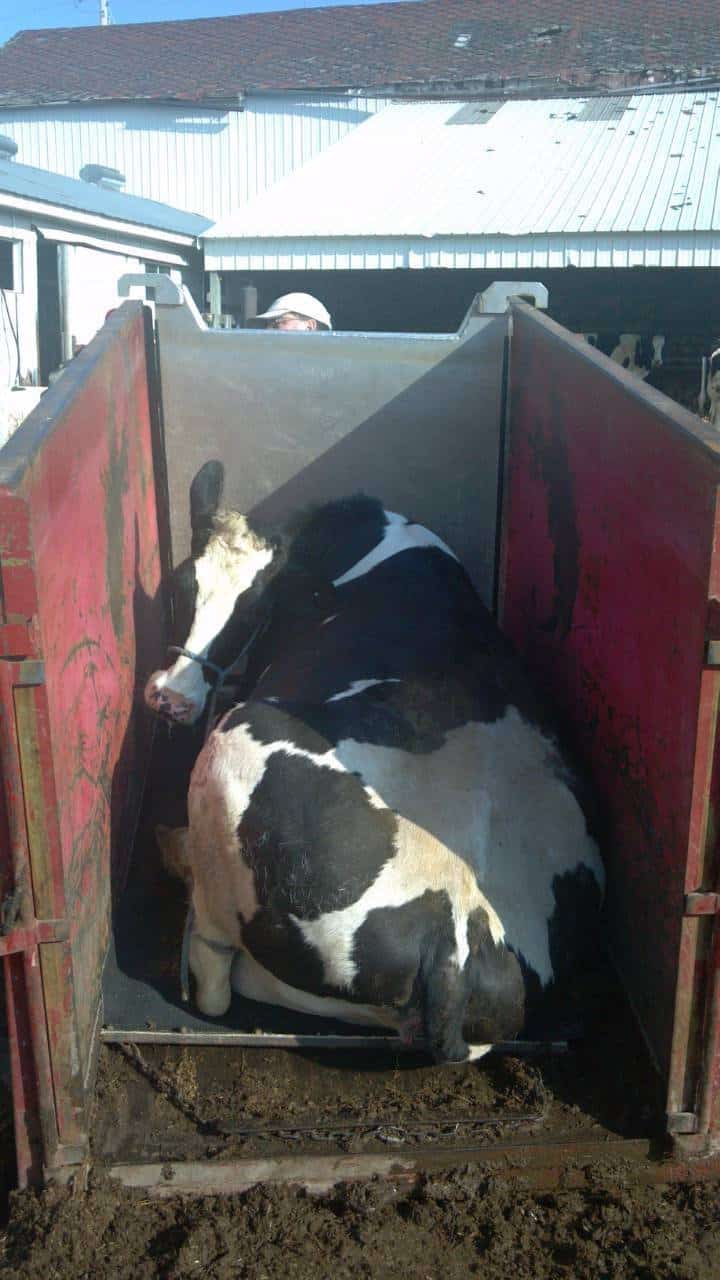 Once she is moved into the tank we put the front plate and rear plate in and move her and the tank to a better location. 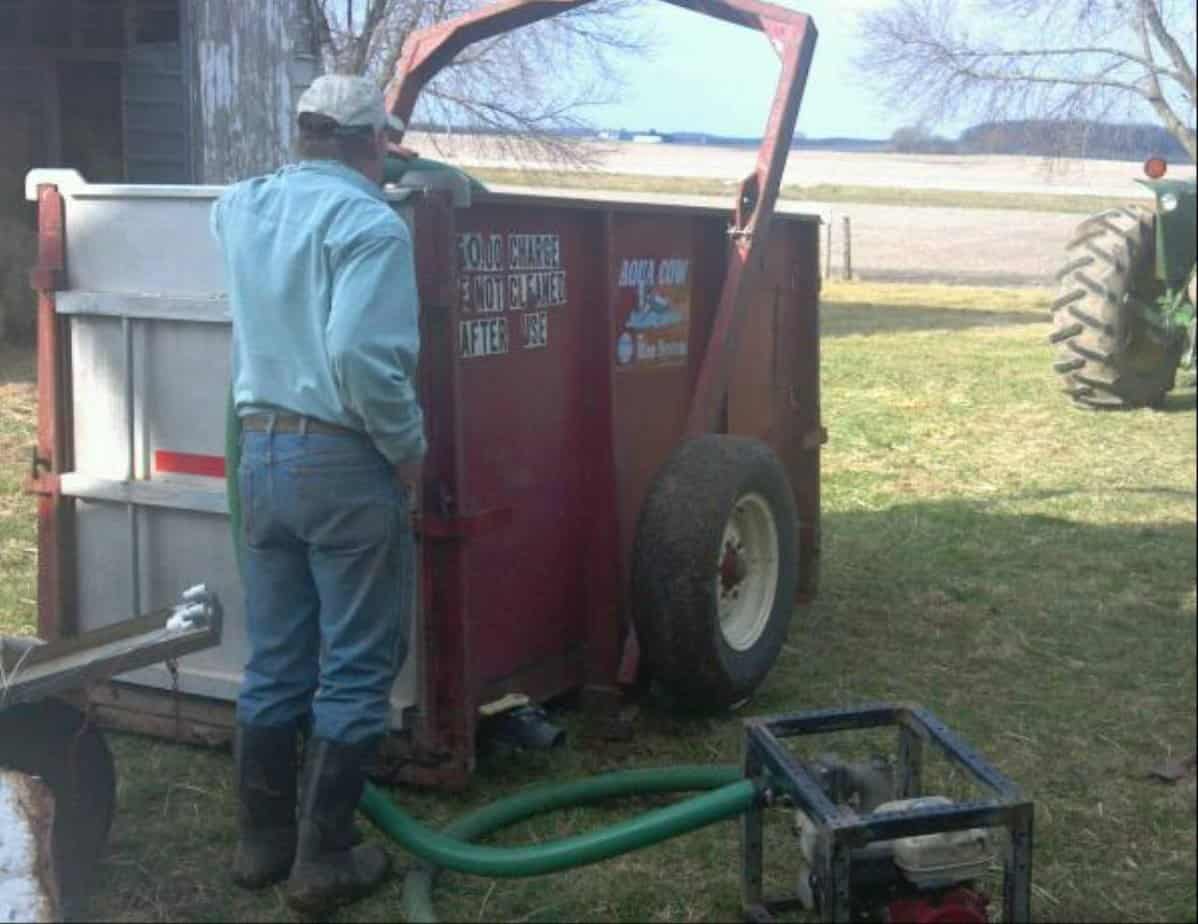 Once we have the tank positioned we start filling it with water. To make sure she is comfortable and she doesn’t get sick we watch the temperature of the water to make sure it never goes below 80 degrees. The truck that brings the tank also had a very large tank of hot water on it to fill from. 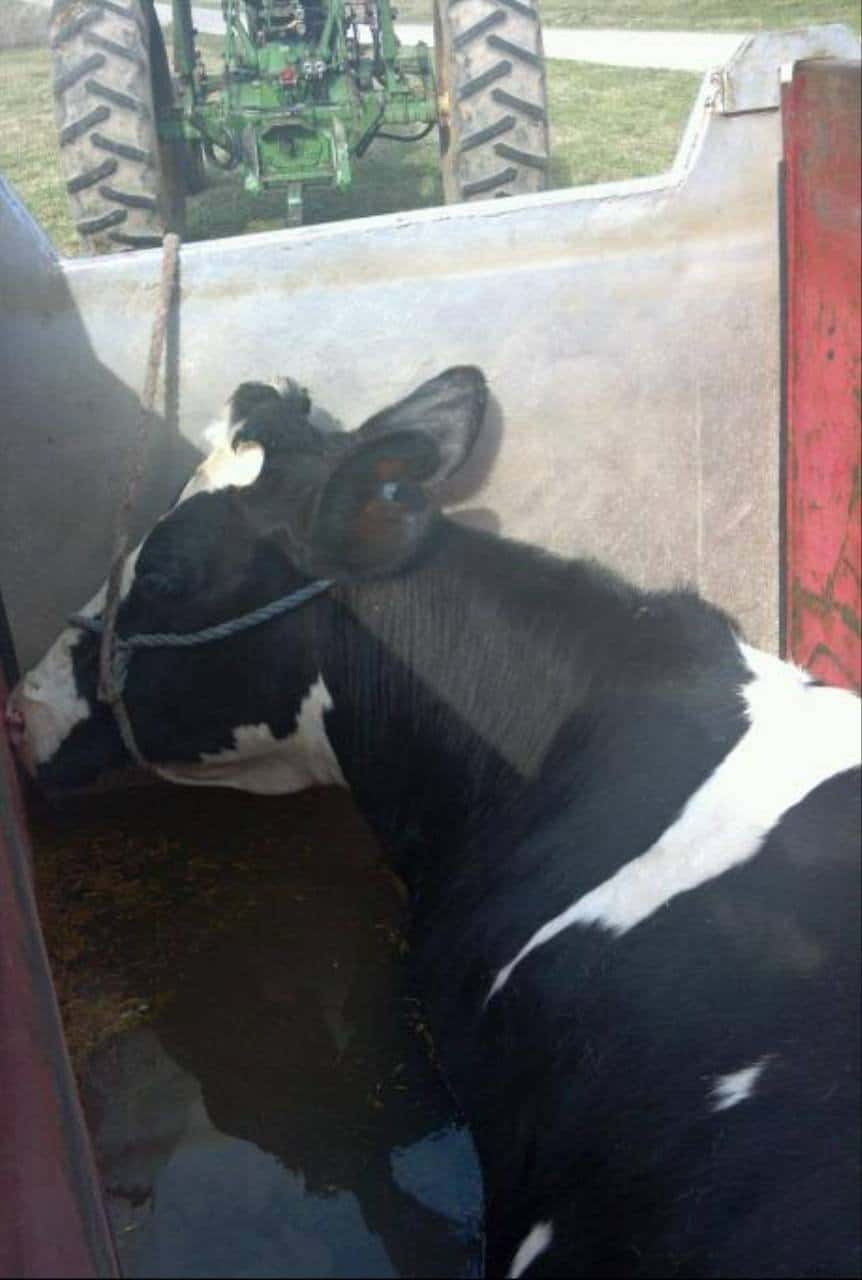 As the water fills the tank, Ripp rises. When the tank is full she is able to stand and use her buoyancy to keep her weight off of the bad leg, helping her to heal. 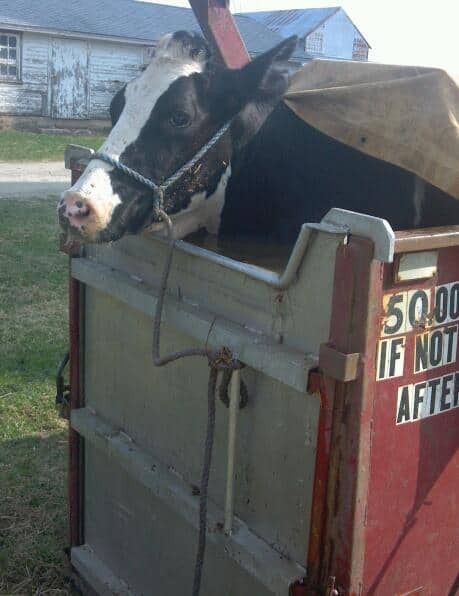 Here she is standing up, letting her leg get circulation back without injuring it further.

So in theory we would let her float for several hours. Then we would drain the tank and allow her to lay down and rest. Then if she still couldn’t get up we would float her again. So after we got her settled in brought her some food and water to drink we let her do her thing and just float.

Except when I went back to check on her a few hours later she had decided that even with the water helping her to stand all she really wanted to do was lay down. So she did. I came out to find her bobbing in the tank with only her nose and eyes above water. She had totally given up. We tried to convince her to stand. We added more water to take off more pressure. We tried re-leveling the tank to put her in a better position and nothing seemed to help. Leaving her in the tank wasn’t an option because if her halter were to come loose she would drown. So we drained the tank. 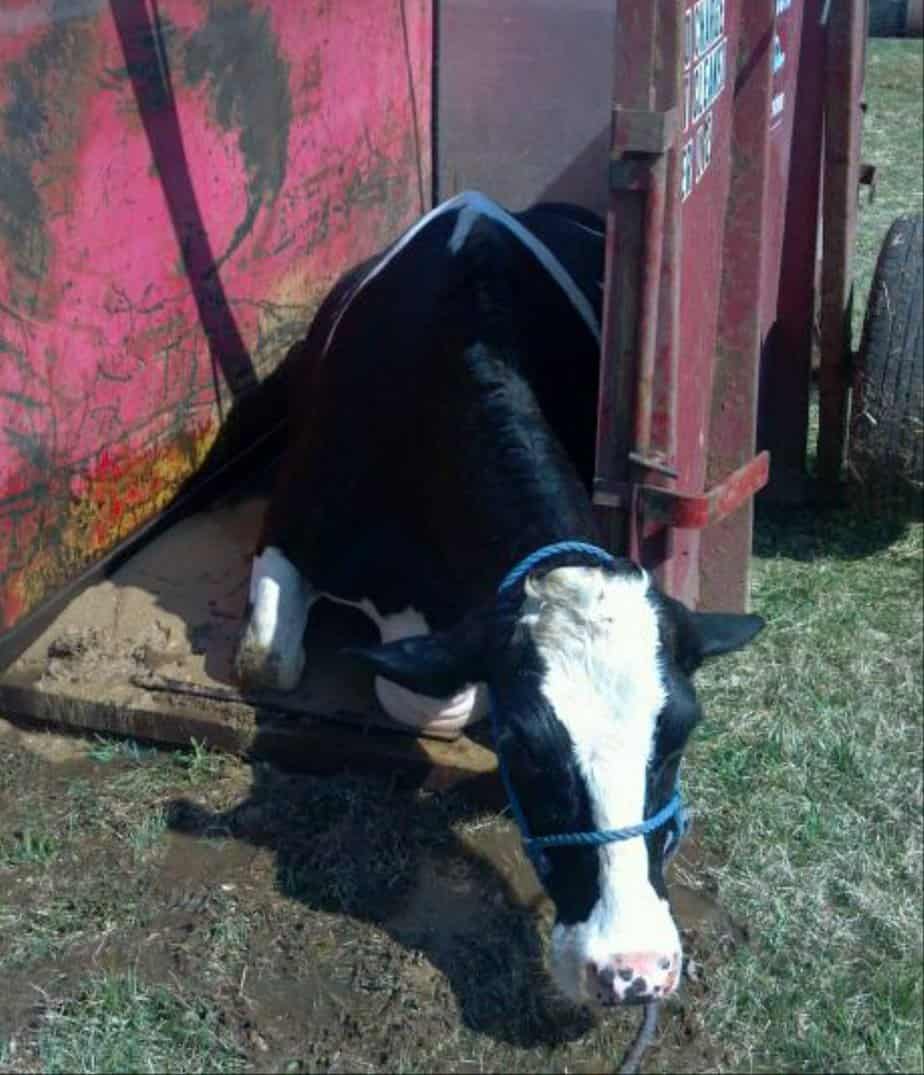 The tank was the best option for her. She refused to cooperate with us.

After we got her out of the tank we were able to determine that her leg was actually broken up near her hip. Putting a cast on a 1200lbs cow isn’t an option. So now we have some very hard decisions to make for her and for her calf. At this point her long term future is bleak.  If we had a way to keep her relatively comfortable for a week or two we could deliver her calf early and humanly put Ripp down. However she is in a lot of pain now and while we have been administering pain medicine to her, a broken leg really hurts. We could have the vet out to perform a c-section to try and save the calf but a calf born this early doesn’t have the best chances.   If we could get her stand for even a few minutes we could have the local butcher come out and harvest her meat. A cow that can’t stand up on her own can not be sold and her meat can not be used for humans. In addition to this she has pain medicine in her system now and meat from an animal that has been treated with these drugs is not allowed into our food system.

So Ripp’s story is a sad one. Not only will we have to put her down later today, she will go to a rendering company. Ripp is one of the Herdsman’s cows. Not only is a loss like this hard because he has raised her since she was a calf. He is also now out her monetary value as well as well as the calf that she is carrying.

Life sure isn’t sunshine and rainbows on the farm. Things like this happen on conventional farms and organic farms. I am telling you Ripp’s story because I want you to know that we value the lives and well being of our dairy cows. When shit happens on a dairy farm we  sometimes end up having to make very difficult choices. However the comfort of our cows and treating them humanly will always be the first priority.

What would you do if you were Ripp’s owner? How would you handle an injury like this?