I, like just about everyone on facebook, twitter, instagram, pinterest and every other form of social media, tend to post a lot of pictures.  No real surprise that instead of kids, cats, dogs or shoes my pictures are mostly photos of cows, calves and farm life. Cats, dogs, shoes and other random photos do make the cut but it’s mostly all about the cows. If you follow me on twitter and were to look back on my tweets you would see lots of bad, blurry snapshots of wet calves late at night, usually with their mother’s muzzle in the frame licking the new calf off. The next morning you would see photos of a cute, dry, fluffy calf cuddled up in it’s calf hutch. But i’ve never really posted much about what happens between the photos. So I decided to take some photos from start to finish (mostly, I thought of this idea part of the way through) and share them with you.

So here it is…. How baby calves go from wet and squishy to soft and cuddly. 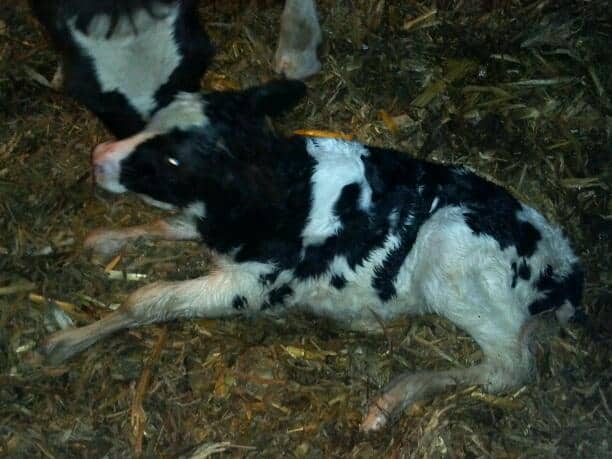 When we have a new calf born the first thing I do is make sure that the new mama gets up and shows an interest in her baby. Calves need the stimulation of their mother licking them off to get their bearings after being born. If the cow doesn’t show an interest in the calf I will grab a towel and start to rub the baby dry myself. Thankfully Gentle had the instinct to lick off her calf. The second thing I do when we have a new calf born is lift up it’s back leg and check the plumbing. While we do use Ultrasound to check gender of our calves before they are born sometimes we get a surprise. Gentle had a heifer (girl) calf. 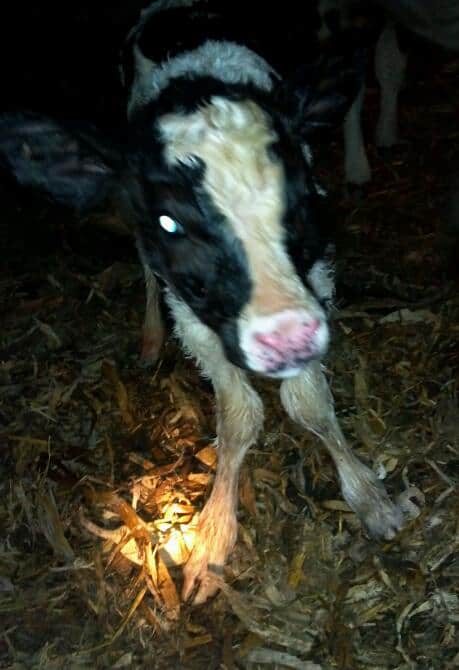 She got up on her own! But she sure looks wobbly.

One of the most common questions I have from people about calves is why we don’t keep baby calves with their mothers on a dairy farm. Or why we keep calves in those little houses and not with their moms. My answer is that we do let the mama cows lick off their babies, but after that we take over care of the calf. We do this for many reasons. The first is that our cows calve in a group pen, if you have ever been in a situation where you have a pack of baby hungry women and a newborn you can imagine what the calving pen is like after a calf is born. Often times a cow other than the one who gave birth will want to claim the new calf as her own. Some times several cows want the calf to be theirs. This usually upsets the actual mother of the calf and since cows can’t use their words, a lot of pushing and head butting comes into play. The problem with this is that these cows get so caught up in wrestling that they forget that there is a brand new baby in the area and the calf can get stepped on and hurt or even killed. The second reason we take over for the cows is that just like a human newborn calves don’t have much of an immune system built up yet. For the same reason that new moms refuse to hand over their precious bundle of joy to a hacking, sneezing and feverish person we do what we can to stop the spread of any bugs to the baby calf. Since no one has been able to litter box train a cow yet, manure happens and as you can imagine manure can carry said bugs. A third reason we take over and one that will resonate with any mother who has nursed her child…. Calves are born with teeth and they are sharp! When a calf is hungry they will wander up to their mother and take their cute little heads and punch their mother’s udder with it to get them to let down their milk. I am not certain why a cow is designed to reward bad behavior but they are. Then the calf with start to suckle, teeth and all. While a beef cow’s udder is more built for this kind of thing a dairy cow’s udder just doesn’t handle the abuse as well. 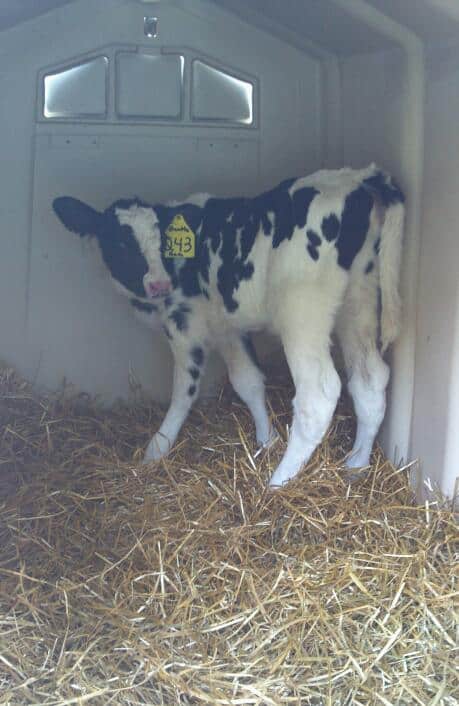 This calf hutch will be her home until she is weaned from milk and ready to move into a group pen.

So after the calf is born and we have moved the calf to her own hutch, her mother will be milked. This milk is called colostrum, it is thick and sticky and is full of maternal antibodies that will help the new calf build a strong immune system. Before the calf is given the colostrum, on our farm, we use a product called Ecolizer. It’s an oral dose of antibodies that will help her build immunity specifically to the e.coli bacteria.

This is what the tube looks like. Ecolizer is made by Novartis and I have seen an improvement in overall calf health since I started using it.

After the calf has a chance to absorb the Ecolizer, it’s time to eat! Because the colostrum from the cow is so important for the calf’s future we want to make sure that the calf gets at least a gallon of colostrum into their tummy in the first 12-24 hours. This is another reason why we take over from the cow. It’s vital to the calf that it get enough colostrum in the right amount of time. A calf slowly loses the ability to absorb the antibodies from the colostrum every hour after the first 6 hours of it’s life. 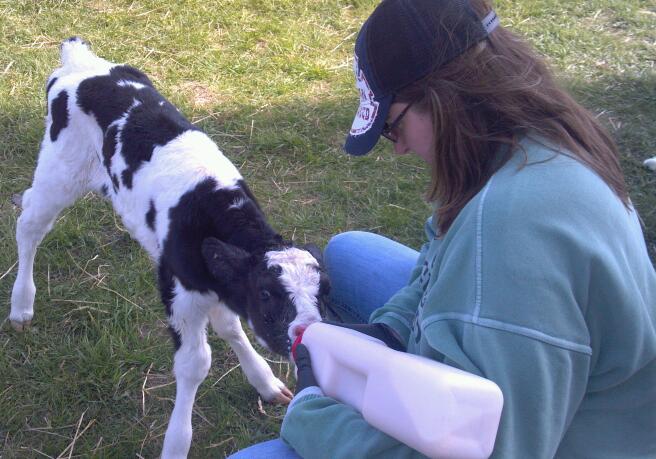 While this little girl is smaller than average, it’s still important that she get a full gallon of colostrum. Since I don’t want her to get too full I will feed her the entire amount over the course of about 8 hours.

The next important step is to make sure the calf is identified. Most dairy farms use ear tags to do this. The calf is assigned a number and given a name. On our farm the calf gets a name that starts with the same letter as it’s mother’s name. So Gentle had…. 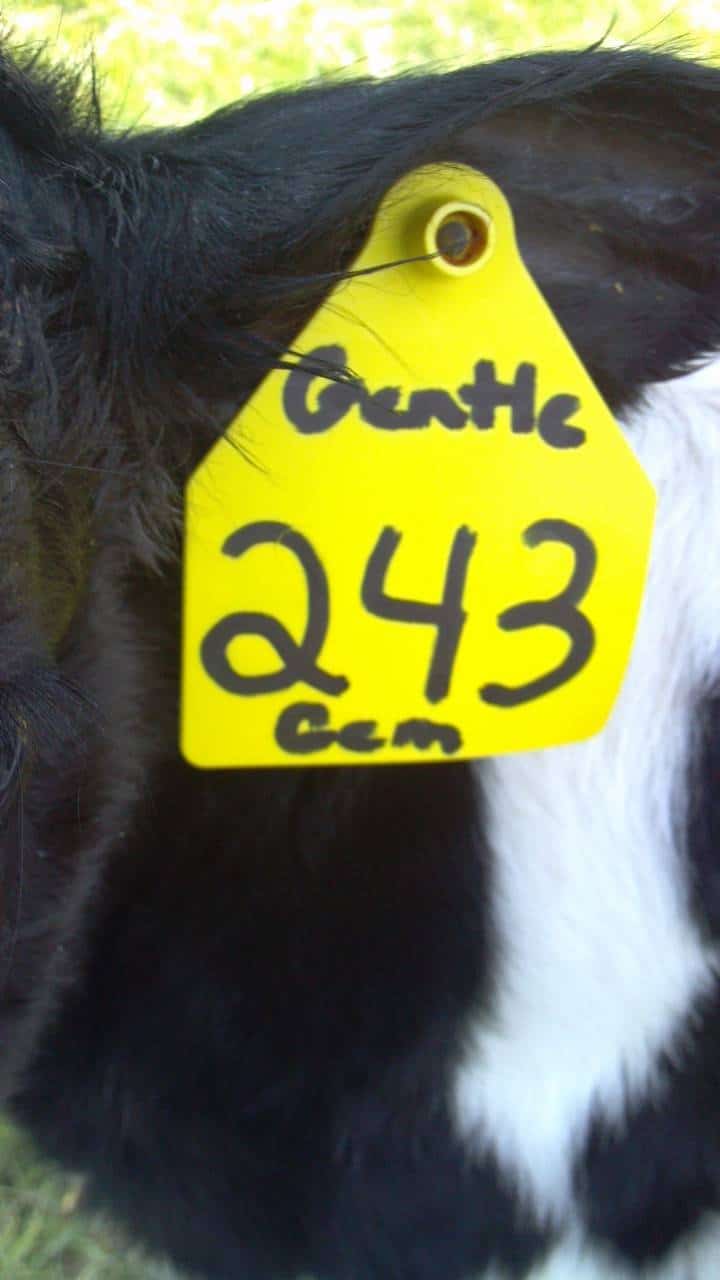 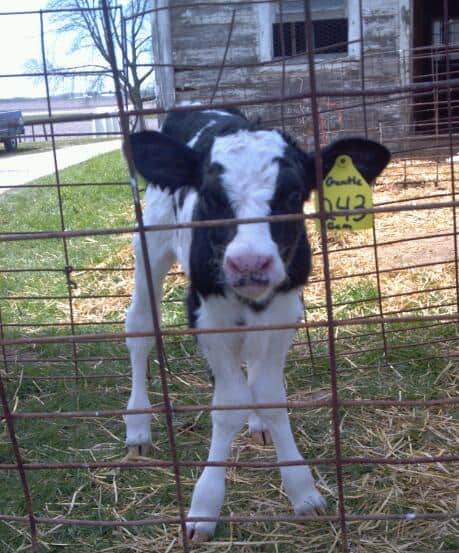 Hanging out in the run in front of her hutch.

Little Gem was born with some pretty crooked legs. This is probably due to a combination of being scrunched up inside of mom and not getting enough selenium. Most areas of our country don’t have to worry about getting extra selenium into their expectant mothers because the feed grown in the area contains a good amount. But here in Southern Wisconsin we have very low selenium levels and extra supplementation is needed. To help Gem get good strong legs under her I gave her a small dose of selenium. 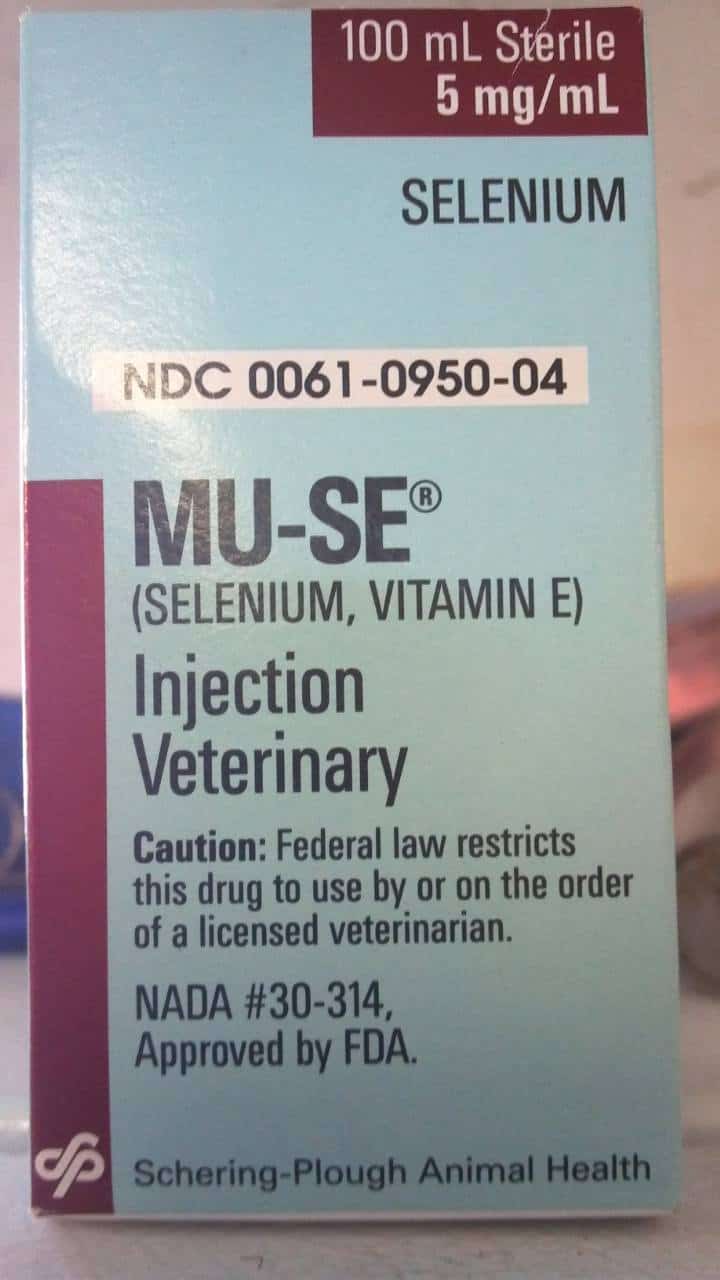 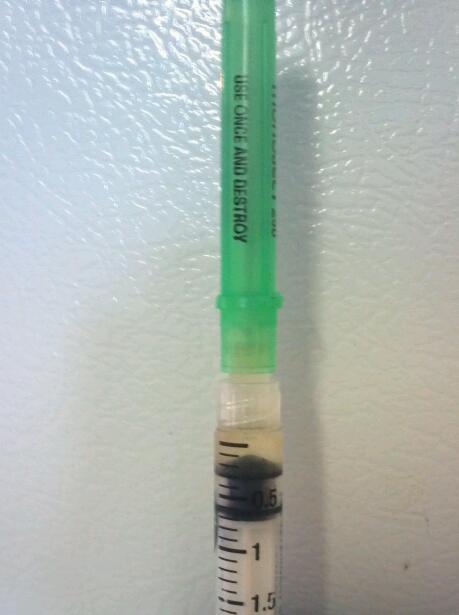 Just a very little bit is needed to help her get on the right track.

So Gem was born early Saturday morning. She is doing very well and her legs have already straightened out a great deal. Gem will live in her hutch for the next 2-3 months. We usually wean the calves off of milk at about 2 months old. They will stay in their hutch until they are ready to be moved into group housing with a few calves that are the same age and size. So the next time you see calves in hutches I hope you will have a better idea of how we care for our calves. If you have a question please leave a comment and I will do my best to answer it.

Previous Post: « Pork Medallions with Capers and Olives, and Why I’ll Never Raise Pigs Again.
Next Post: Excuse me, your bias is showing. Dissecting an Animal Rights video. »