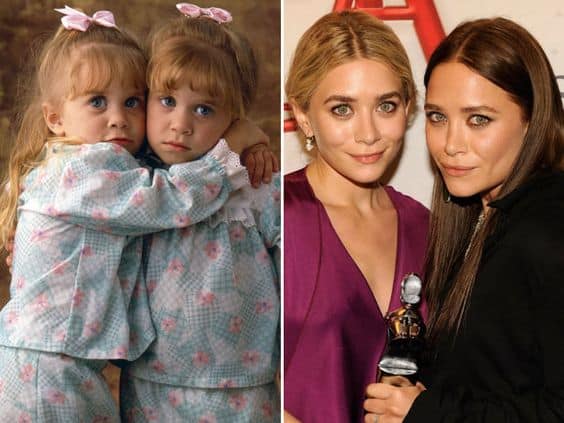 I looked for an hour and couldn’t find who to credit either of these photos too.

“Double your pleasure, double your fun” might work for Doublemint gum and sitcoms actresses turned fashionistas from my childhood but on a dairy farm twins aren’t so great.

I’ve often shared photos of twin calves born on our farm on Instagram and my Facebook page. Baby calves are adorable and twins bring twice the cute to the table. However, as cute as twin calves are in photos, in real life they are the last thing I hope for.

On average, twins happen in dairy breeds around 5% of the time and only about 1% of the time in beef breeds. On our farm we average a 10-15% twin rate. This gives me plenty of chances to take cute twin photos and also lots of headaches. I’ve seen lots of confusion about twin calves in comments online, so I thought I’d share some facts about twin calves. 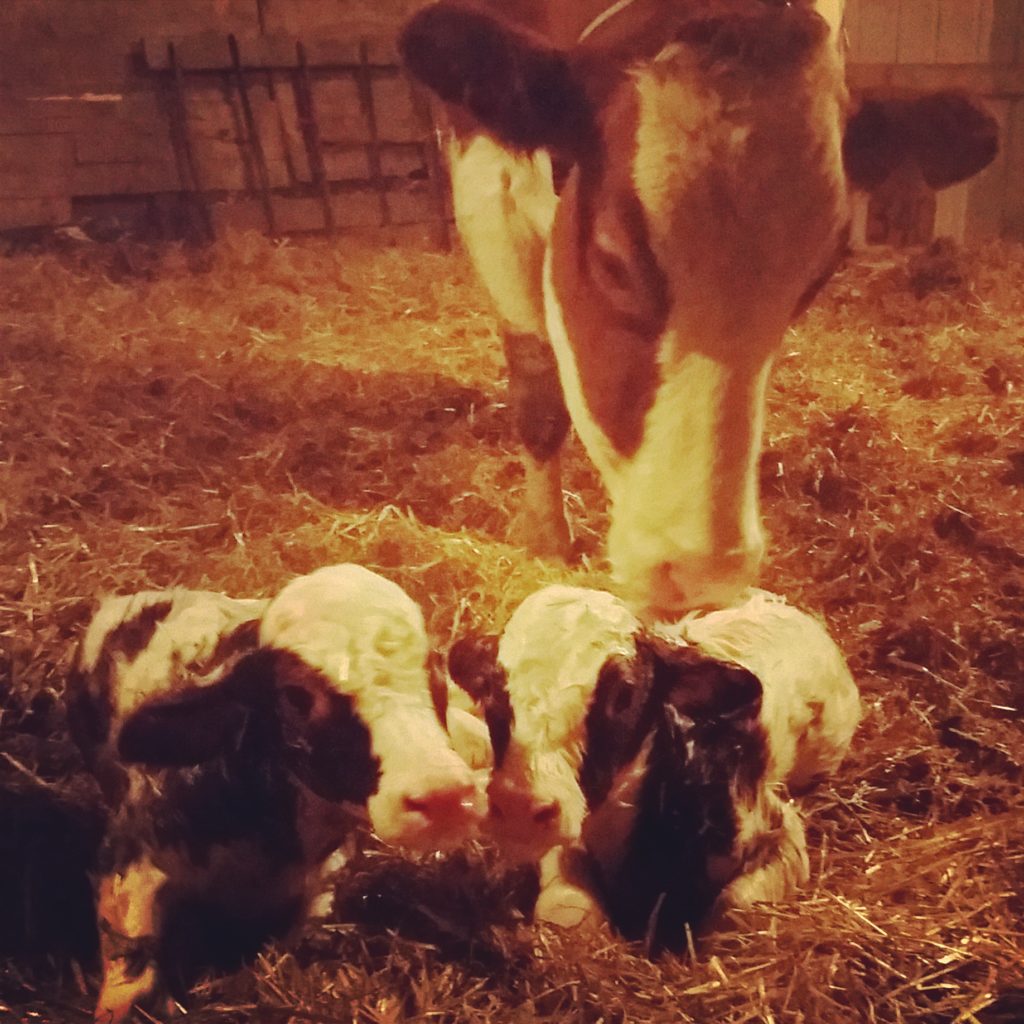 Twin calves are cute when they are covered in slime… 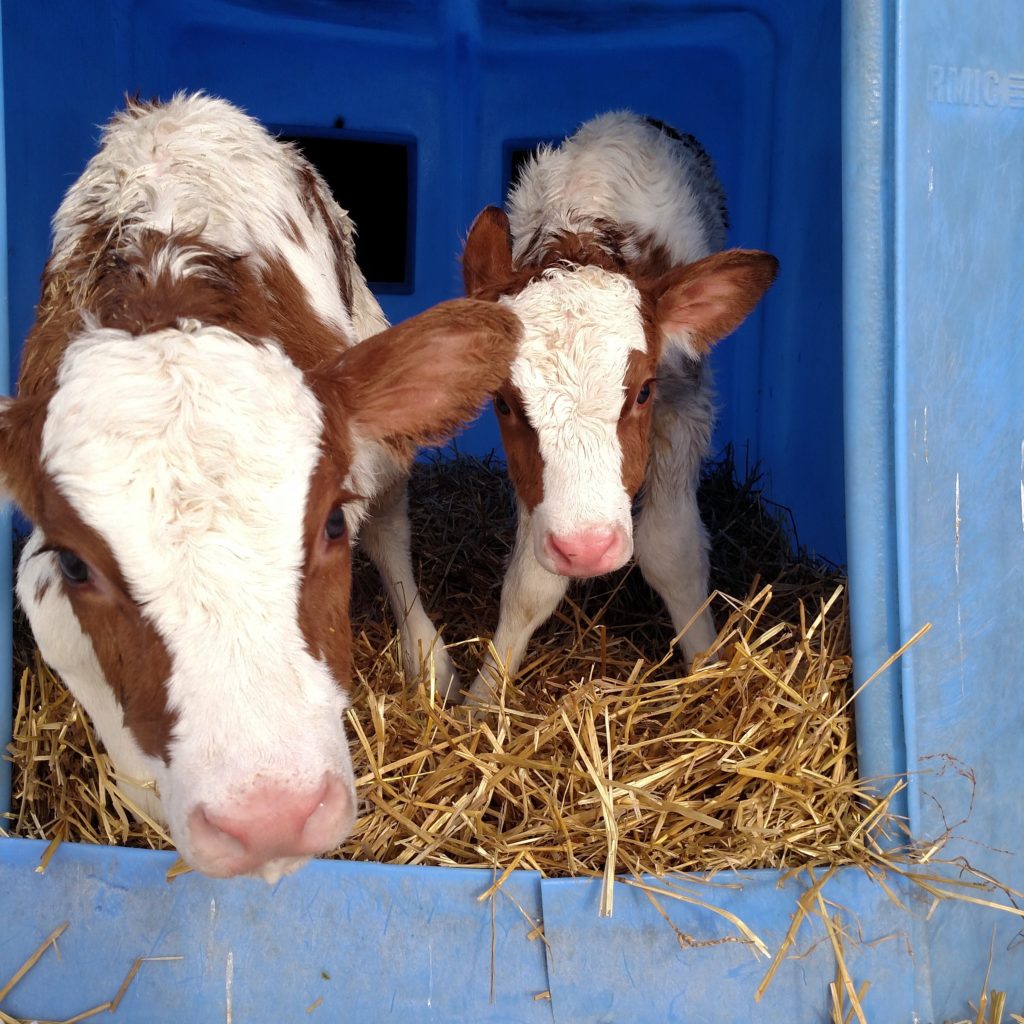 And even cuter when they are dry.

Yes calves are cute and while it would seem like a good thing to get a bonus calf, when you look at the big picture, twins can be more of a bummer than a bonus. While sheep, goats and deer often have twins and even triplets, a cow is made to carry one calf at a time. On our farm we check our cows for pregnancy around 30 days after they have been bred and then again when they are 60-100 days pregnant. Even at the start of pregnancy, twins can cause issues. The rate of abortions (which is what a miscarriage is called in cattle) is higher in twin pregnancies than single pregnancies. It is not uncommon for us to find twins at the 30 day check and then find that one calf or both calves have died at the next pregnancy check. It is also more likely for a cow carrying twins to lose the pregnancy later in gestation. Cows carrying twins tend to calve prematurely, causing problems with the calves not being fully mature.

A cow having twins almost always needs help calving. You can’t blame her, trying to get two heads, two bodies and eight legs through one hole in an orderly fashion is no easy task. We watch all of our cows closely for signs of problems during labor but cows are horrible about calling their farmer when they go into labor at 3am and need help. Even when we are there to help, sometimes one or both calves die during birth because of complications.

To top off all those reasons, after having twins a cow often has health issues. Having twins leads to more retained placentas and uterine infections. Carrying and growing two calves takes a toll on a cow. We do our best to keep all of our cows healthy, twins work against us. 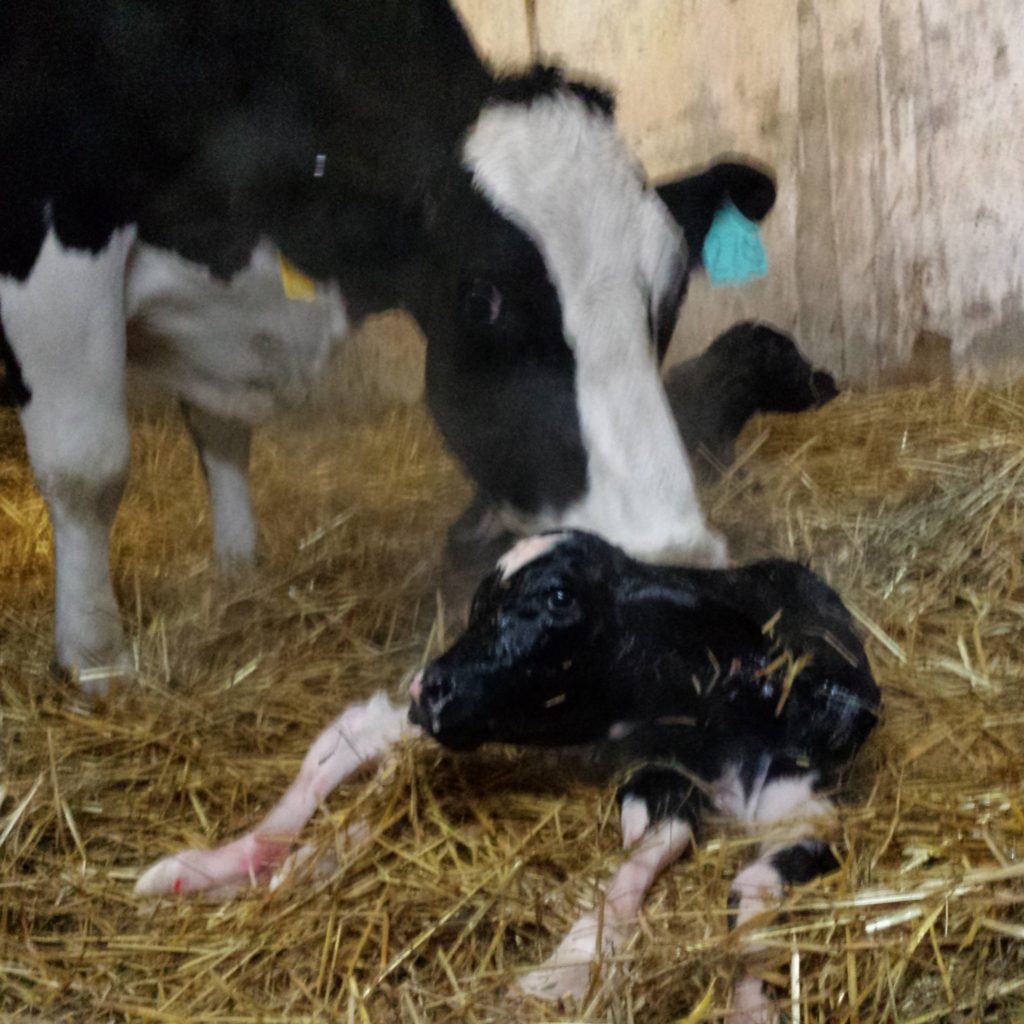 Almost all dairy cow twins are the result of double ovulation. This means the cow released two eggs, they were both fertilized and both implanted. In cows, this is called dizygous twins, in humans we call this fraternal twins. Less than 10% of cattle twins are monozygous, or “identical” twins. So even if you have two female or two male calves that look the same, odds are they probably aren’t identical twins. 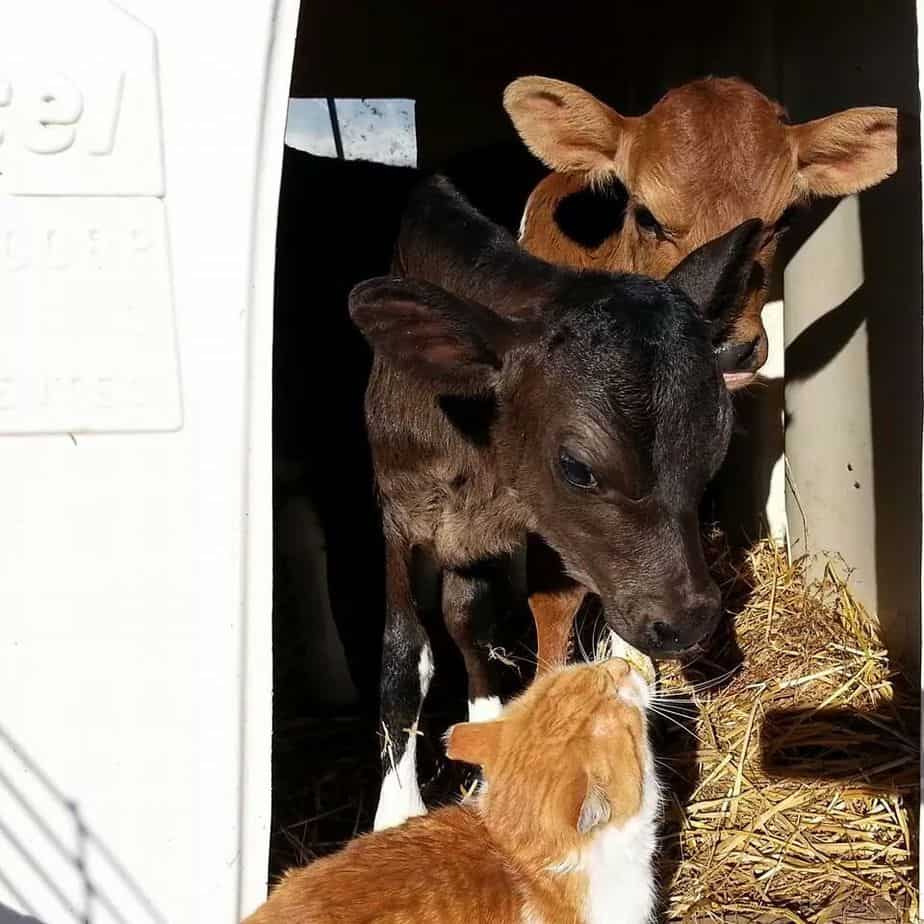 Sometimes twins look completely different from each other.

When a set of twins is born and one is a bull calf and the other is a heifer calf, more than 90% of the time the female is infertile. The infertile female twin is called a freemartin. This happens because early in embryonic development it’s common for the separate embryos to fuse and share the same blood supply. The hormones that the male fetus produces can cross to the female fetus and causes reproductive tract abnormalities. A freemartin heifer will carry a Y chromosome instead of the typical XX chromosomes of a female.

There are a few ways you can check to find out if a heifer is a freemartin, only one of them is something you can describe in public without people looking at you weird. Since a freemartin’s reproductive tract isn’t usually formed correctly, you can start with a physical exam. It’s pretty common for a freemartin to have a shorter vaginal canal, so a quick measurement is a good place to start. You can read more about that here. You can also keep a heifer until she is breeding age and see if she shows signs of cycling normally. However a freemartin can still show signs of being ready to breed even if she’s not able to carry a calf. Nature is silly that way.

On our farm we use a blood test that checks for the presence of the Y chromosome in the calf’s DNA. We pull blood from the newborn calf and send it to a company called Genetic Visions. It takes about a week to get results and costs $25.

Since a freemartin can’t get pregnant, she can’t produce milk. Our freemartin calves are sold to the same person that buys our bull calves and they are raised for beef.

Finally got a bit of good news! This little girl was born twin to a bull calf. That almost always means (~90%)that the…

Want to know why our farm has more than double the average amount of twins? It all started when my in-law’s got their start farming. They bought cows from several places and several of those cows came from long lines of twinning families. Just like in humans, twins run in families, the genetics for having twins can be passed down in cows. When my in-laws were starting their herd and trying to grow their cow numbers, they kept every female calf, including possible free martins. So when those starter cows had a set of heifer twins and they went on to have twins, and those twins had twins and soon a large portion of our herd had those twinning genetics. We have cows in our herd that have twins almost every year. The twin genetics are so strong in our herd that we even have one or two heifers each year that have twins, which is extremely rare.

Genetics are the main contributing factor for twins but there are some studies out there that support the idea that more twins are born on farms with higher milk production. The theory is that the higher levels of nutrition required for higher milk production leads to more cows who double ovulate. Of course, sometimes twins just happen for no know reasons. 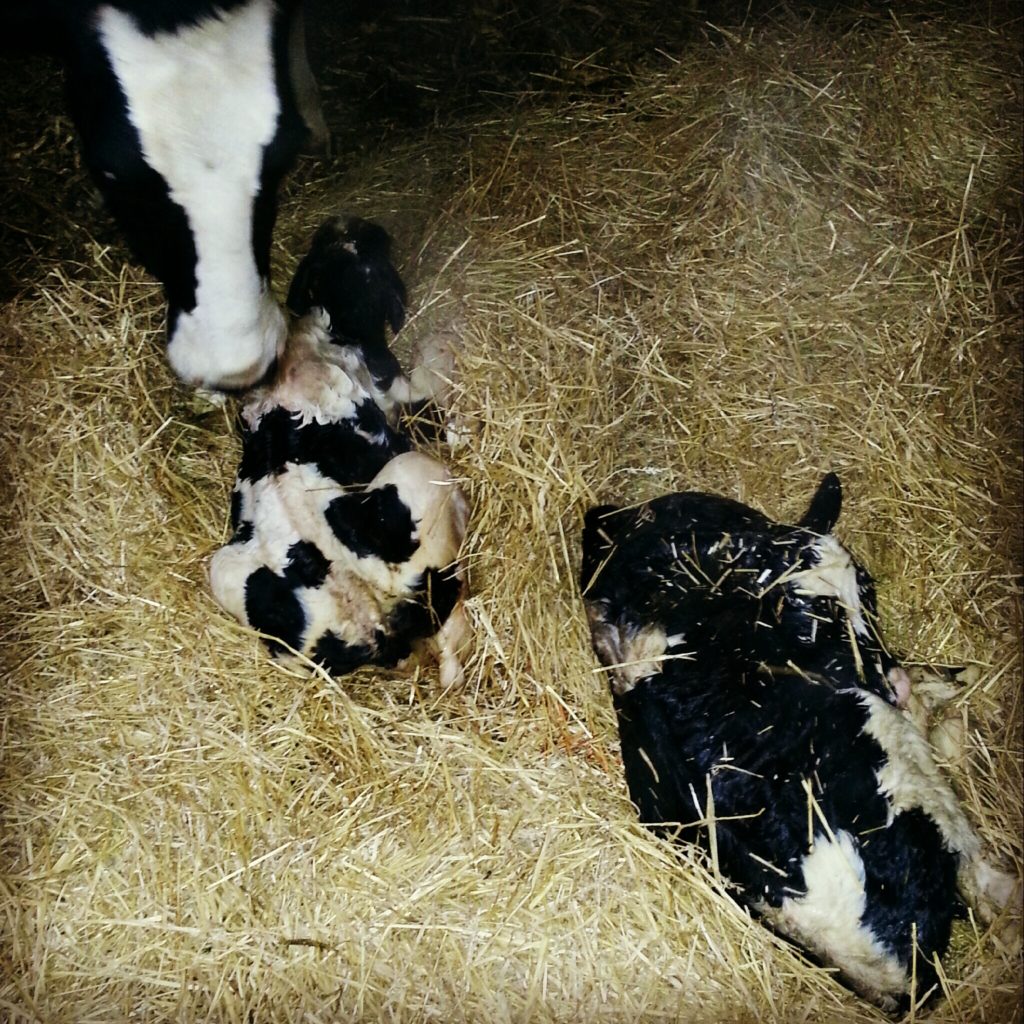 This is not a science based point but in my own personal experience it’s a fact.  In theory 25% of twin born should be two bulls, 25% two heifers and 50% should be a mixed set with one bull and one heifer. I haven’t actually done the math but I can tell you that sets of twin heifers are rare unicorns on our farm! The majority of twins on our farm are sets of bulls and mixed sets of twins. Since we sell our bull calves and only keep heifer calves as future members of our milking herd, whenever one of our favorite cows is diagnosed with twins, I am willing to bet money that it’s not going to be twin heifers. 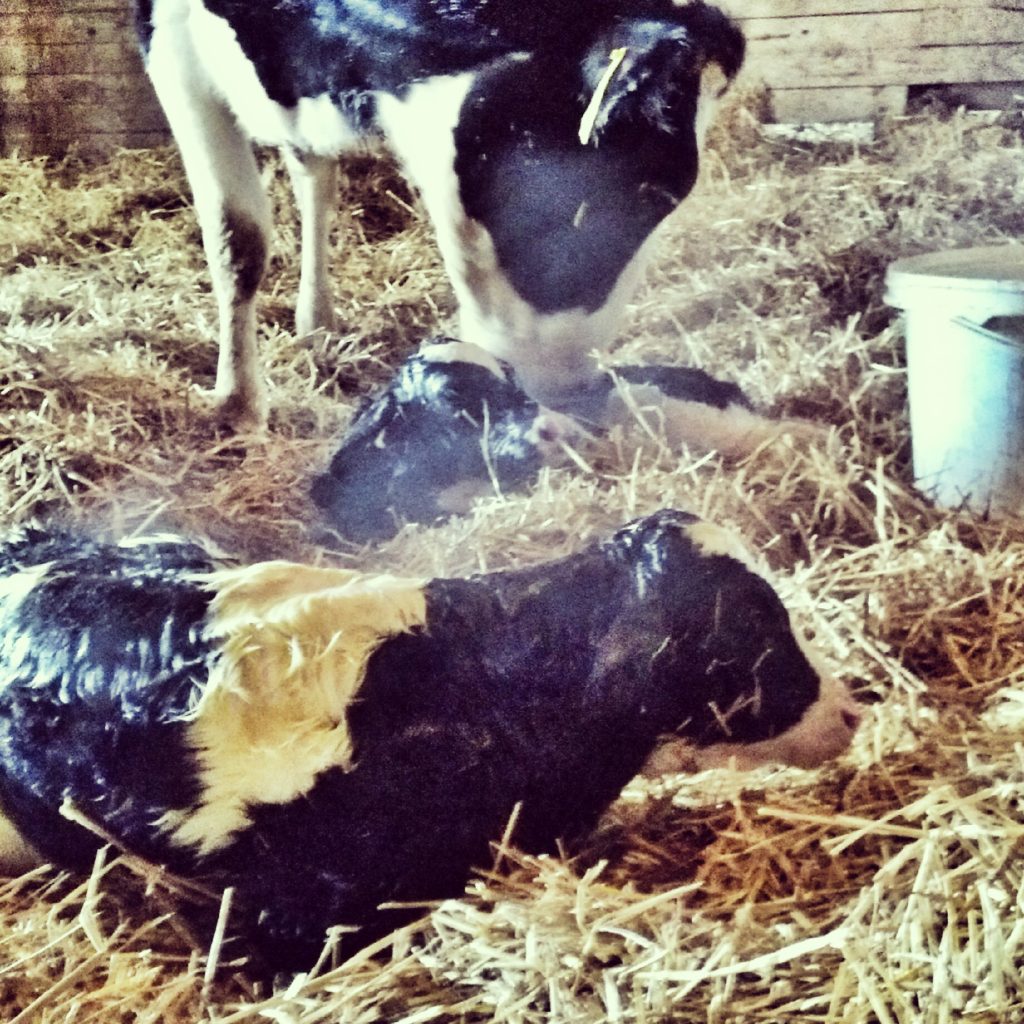 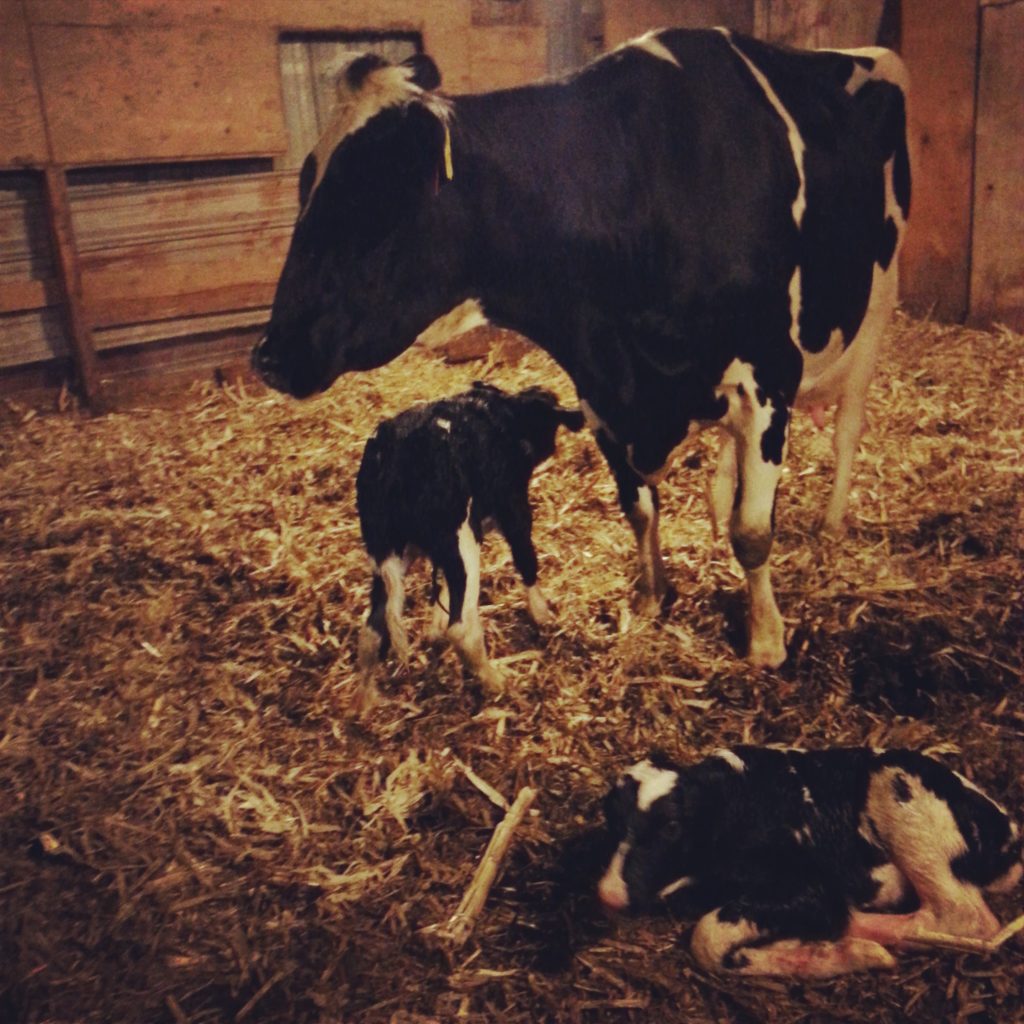 If you want to read more about twins from a bovine reproduction expert, this paper from Dr. Paul Fricke, a professor at the University of Wisconsin goes into a lot more detail. Read it HERE.